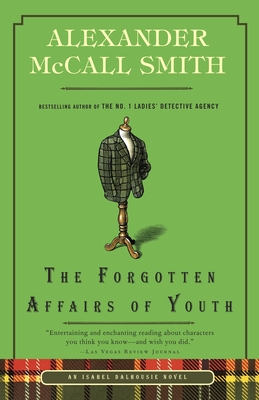 In this eighth installment in Alexander McCall Smith’s captivating Isabel Dalhousie series, our irrepressible heroine tries to untangle complex questions about both the past and the present.

Isabel’s new friend Jane Cooper, a visiting Australian philosopher who was adopted as a small child, has come to Edinburgh searching for information about her biological father. Naturally, Isabel is more than happy to offer her services. At the same time, she must find time for her own concerns: her young son Charlie, who’s leaving babyhood further behind each day; her housekeeper Grace, who has recently begun getting financial advice from her spiritualist; her niece Cat, who’s in a new relationship, and the most pressing question of all: when and how Isabel and Jamie will finally get married. As she investigates the forgotten affairs of youth Isabel begins to wonder what those affairs lead to in the present, and in the process she discovers a whole new understanding of the meaning of family.

Alexander McCall Smith is also the author of the beloved bestselling No. 1 Ladies’ Detective Agency series, the Portuguese Irregular Verbs series, the 44 Scotland Street series, and the Corduroy Mansions series. He is also the author of numerous children’s books. He is professor emeritus of medical law at the University of Edinburgh and has served with many national and international organizations concerned with bioethics. He was born in what is now known as Zimbabwe and taught law at the University of Botswana. He lives in Scotland. Visit his website at www.alexandermccallsmith.com.


Praise For The Forgotten Affairs of Youth (Isabel Dalhousie Series #8)…

“Entertaining and enchanting reading about characters you think you know—and wish you did.” —Las Vegas Review Journal

“Dalhousie [is] back in true form. . . . An endearing, intelligent and kindly character.” —The Charleston Post & Courier

“Readers get to soak up the cozy atmosphere of this Scottish university town and McCall Smith’s gentle good will.” —The Boston Globe

“A real treat.” —The Plain Dealer

"You don't read these books to find out 'who done it,' you read them for the pleasure of spending a few hours following a sensitive, intellectual woman as she roams around Edinburgh speculating ingeniously about everything from moral responsibility to aesthetics and metaphysics." —BlogCritics

“Totally absorbing. . . . Isabel is everything you’d want in a philosopher, but she is also quirky and witty.” —Booklist (starred review)

“You needn’t be a series-long admirer of Isabel Dalhousie to be beguiled by this curious philosopher and casual sleuth. . . . A heroine worth following.” —Publishers Weekly

“McCall Smith’s talent for dialogue is matched only by his gift for characterization. It’s hard to believe that he could make up a character as complex and unique as Isabel. She is by turns fearless, vulnerable, headstrong, and insecure, but always delightful.” —Chicago Tribune

“In Mma Ramotswe, [McCall Smith] minted one of the most memorable heroines in any modern fiction. Now, with the creation of Isabel Dalhousie, he’s done it again. . . . She’s such good company, it’s hard to believe she’s fictional. You finish [one] installment greedily looking forward to more.” —Newsweek

“Isabel is a force to be reckoned with.”—USA Today