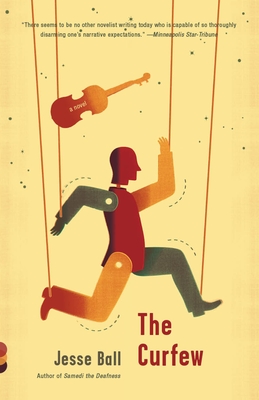 William and Molly lead a life of small pleasures, riddles at the kitchen table, and games of string and orange peels. All around them a city rages with war. When the uprising began, William’s wife was taken, leaving him alone with their young daughter. They keep their heads down and try to remain unnoticed as police patrol the streets, enforcing a curfew and arresting citizens. But when an old friend seeks William out, claiming to know what happened to his wife, William must risk everything. He ventures out after dark, and young Molly is left to play, reconstructing his dangerous voyage, his past, and their future. An astounding portrait of fierce love within a world of random violence, The Curfew is a mesmerizing feat of literary imagination.


Praise For The Curfew (Vintage Contemporaries)…

“[A] brilliant work of speculative fiction that calls to mind Kafka’s The Trial, Nabokov’s Invitation to a Beheading and, most prominently, Bradbury’s Fahrenheit 451.” —New City Chicago

“Few authors have the guts or the skill to pull off a book like this.” —Time Out Chicago

“There is a hushed and elegiac quality to this nocturne of a novel. . . . Ball possesses a remarkably mythic sensibility, achieving a spare yet merciful mode that brings Borges, Calvino, and Simic to mind. Solemn beauty, beguiling invention, and unnerving insights into insidious tyranny and terror and depthless sorrow make for a haunting dystopian tale.” —Booklist

“Jesse Ball once again manages to deliver a devastating blow with a deceptively small package. In his third novel, father and daughter William and Molly live as happy a life as they can under a shady, authoritarian regime. The horrors are only hinted at in Ball's poetic and economic style, but the love among family shines through it all.” —AM New York

“Written in clipped and brutal prose . . . [the] narrative is buoyed by nuanced characters. . . . Ball’s ideas and heart make this a very compelling read.” —Publisher’s Weekly

Jesse Ball is a poet and novelist. His novels include The Way Through Doors (2009) and Samedi the Deafness (2007), which was a finalist for the Believer Book Award. He has published books of poetry and prose, The Village on Horseback (2010), Vera & Linus (2006), March Book (2004). A book of his drawings, Og svo kom nottin, appeared in Iceland in 2006.  He won the Paris Review’s Plimpton Prize in 2008 for The Early Deaths of Lubeck, Brennan, Harp & Carr.  His poetry has appeared in the Best American Poetry series. He is an assistant professor at the School of the Art Institute of Chicago and teaches classes on lying, lucid dreaming and general practice.