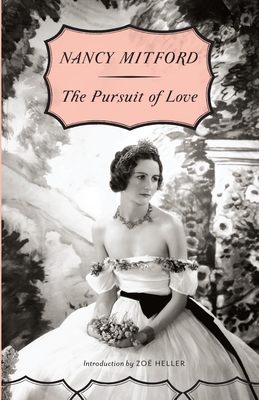 The Pursuit of Love (Radlett and Montdore #1)

Mitford’s most enduringly popular novel, The Pursuit of Love is a classic comedy about growing up and falling in love among the privileged and eccentric. Now an original series on Prime Video.

Mitford modeled her characters on her own famously unconventional family. We are introduced to the Radletts through the eyes of their cousin Fanny, who stays with them at Alconleigh, their Gloucestershire estate. Uncle Matthew is the blustering patriarch, known to hunt his children when foxes are scarce; Aunt Sadie is the vague but doting mother; and the seven Radlett children, despite the delights of their unusual childhood, are recklessly eager to grow up.

The first of three novels featuring these characters, The Pursuit of Love follows the travails of Linda, the most beautiful and wayward Radlett daughter, who falls first for a stuffy Tory politician, then an ardent Communist, and finally a French duke named Fabrice.

Featuring an introduction by Zoë Heller.

Praise For The Pursuit of Love (Radlett and Montdore #1)…

“Mitford, describing in a tart and easy fashion the diverting activities of a titled English family, is mocking, good-tempered, and very funny.” —The New Yorker

“The deliriously foolish story of an inane but charming girl and her outrageously eccentric family.” —The New York Times

Nancy Mitford, daughter of Lord and Lady Redesdale and the eldest of the six legendary Mitford sisters, was born in 1904 and educated at home on the family estate in Oxfordshire. She made her debut in London and soon became one of the bright young things of the 1920s, a close friend of Henry Green, Evelyn Waugh, John Betjeman, and their circle. A beauty and a wit, she began writing for magazines and writing novels while she was still in her twenties. In all, she wrote eight novels as well as biographies of Madame de Pompadour, Voltaire, Louis XIV, and Frederick the Great. She died in 1973. More information can be found at www.nancymitford.com.
Loading...
or
Not Currently Available for Direct Purchase