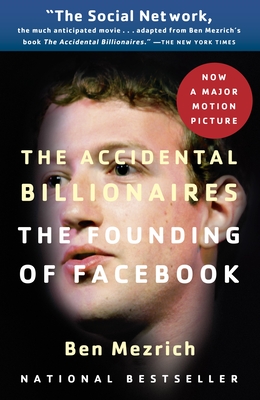 The Founding of Facebook: A Tale of Sex, Money, Genius and Betrayal

“The Social Network, the much anticipated movie…adapted from Ben Mezrich’s book The Accidental Billionaires.” —The New York Times

Best friends Eduardo Saverin and Mark Zuckerberg had spent many lonely nights looking for a way to stand out among Harvard University’s elite, competitive, and accomplished  student body. Then, in 2003, Zuckerberg hacked into Harvard’s computers, crashed the campus network, almost got himself expelled, and was inspired to create Facebook, the social networking site that has since revolutionized communication around the world.

With Saverin’s funding their tiny start-up went from dorm room to Silicon Valley. But conflicting ideas about Facebook’s future transformed the friends into enemies. Soon, the undergraduate exuberance that marked their collaboration turned into out-and-out warfare as it fell prey to the adult world of venture capitalists, big money, and lawyers.


Praise For The Accidental Billionaires: The Founding of Facebook: A Tale of Sex, Money, Genius and Betrayal…

“Uproarious. . . . Stimulating enough to keep even an unmedicated narcoleptic awake.”
—The Washington Times

“Mezrich’s prose has a cinematic flavor.”
—The Boston Globe

“You won’t be able to put the book down. The story’s far too compelling, and entirely too personal, to toss aside.”
—The Oregonian

Ben Mezrich, a Harvard graduate, is the author of eleven books, including the international bestseller Bringing Down the House, which spent sixty-three weeks on the New York Times bestseller list and was made into the movie 21, starring Kevin Spacey. He is a columnist for Boston Common and a contributor to Flush magazine. Ben lives in Boston with his wife, Tonya.

Mezrich's next book, Sex on the Moon, will be published in summer 2011.