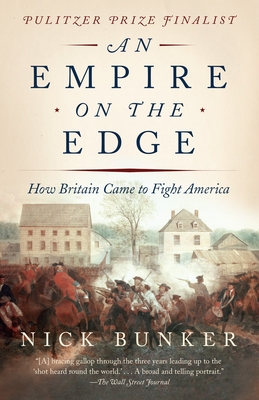 An Empire on the Edge

How Britain Came to Fight America

Finalist for the 2015 Pulitzer Prize in History

Written from a strikingly fresh perspective, this new account of the Boston Tea Party and the origins of the American Revolution shows how a lethal blend of politics, personalities, and economics led to a war that few people welcomed but nobody could prevent.

“A great Empire, like a great Cake, is most easily diminished at the edges,” observed Benjamin Franklin, shortly before the American Revolution. In An Empire on the Edge, British author Nick Bunker delivers a powerful and propulsive narrative of the road to war. At the heart of the book lies the Boston Tea Party, when the British stumbled into an unforeseen crisis that exposed deep flaws in an imperial system sprawling from the Mississippi to Bengal. Shedding new light on the Tea Party’s origins and on the roles of such familiar characters as Benjamin Franklin, John Hancock, Thomas Hutchinson, and the British ministers Lord North and Lord Dartmouth, Bunker depicts the last three years of deepening anger on both sides of the Atlantic, culminating in the irreversible descent into revolution.


Praise For An Empire on the Edge: How Britain Came to Fight America…

“[A] bracing gallop through the three years leading up to the ‘shot heard round the world.’. . . A broad and telling portrait.” —The Wall Street Journal

“Absorbing and detailed. . . . Bunker’s narrative is human and even-handed; and from the Boston harbourside to the salons of London, a complex and epic tale is told with colour and enthusiasm.” —The Sunday Telegraph (London)

“Bunker’s tightly argued and deeply researched book shows how a broader perspective can shed new light on even the most familiar events.” —Foreign Affairs

“A joy. . . . An exciting backstage look at the events that caused the American Revolution. . . . [and] an excellent analysis of the situation in the American colonies and Great Britain in the 18th century.” —New York Journal of Books

“Nearly two and a half centuries after the fact, it would seem all but impossible to shed fresh light and insight into the origins of the American Revolution. And yet, this is precisely what journalist-turned-financial analyst-turned-historian Nick Bunker has accomplished in a majestic new study of the events leading up to shots being fired at Lexington and Concord in 1775.”
—The Manchester Journal

“A nuanced global analysis of Britain’s failure to hold onto its American colonies. . . . riveting. . . . With a sharp eye for economic realities, Bunker persuasively demonstrates why the American Revolution had to happen.”
—Publishers Weekly (boxed review)

“An eye-opening study of the British view of the American Revolution and why they were crazy to fight it. . . . the failure of British leadership to recognize the warning signs will astonish readers who thought the Revolution was just about tea. A scholarly yet page-turning, superbly written history.”
—Kirkus (starred review)

“[An] enthralling examination of the three years leading up to the American Revolution. . . . Bunker sets the story in its global context. However, he is also good at zeroing in on the local and unfamiliar.”
—The Times (London)

“Utterly absorbing and full of colour, we learn afresh what a mess Britain made of leaving America and, crucially and importantly, how that mess shaped the American psyche.”
—Justin Webb, presenter, BBC Today Programme

“Bunker’s is a fascinating historical account, with implications that go beyond its subject matter into the question of how empire-building works—or doesn’t.”
—The Columbus Dispatch

“Nick Bunker dazzles the reader with a deeply researched and clear-eyed accounting of the dissolution of the mighty—but woefully overextended—British Empire, and in particular its 13 colonies in North America. Bunker’s mellifluous prose fairly jumps off the page, drawing the reader deeper and deeper into this intricate and fascinating tale.”
—William D. Cohan

Nick Bunker is the author of Making Haste from Babylon, a history of the Mayflower Pilgrims, described by The Washington Post as “a remarkable success.” Educated at King’s College, Cambridge, and Columbia University, he was a journalist for the Liverpool Echo and the Financial Times, and then an investment banker, chiefly with the Hong Kong and Shanghai Banking Corporation. During his careers in journalism and finance, he traveled widely in China, India, the former Soviet bloc, and the United States. He now lives in Lincolnshire, England.