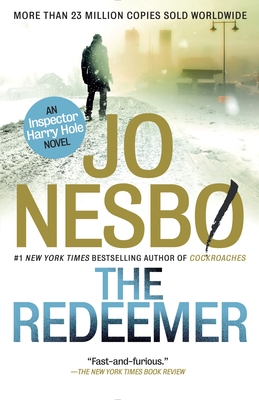 Shots ring out at a Salvation Army Christmas concert in Oslo, leaving one of the singers dead in the street. The trail will lead Harry Hole, Oslo’s best investigator and worst civil servant, deep into the darkest corners of the city and, eventually, to Croatia.

An assassin forged in the war-torn region has been brought to Oslo to settle an old debt. As the police circle in, the killer becomes increasingly desperate and the danger mounts for Harry and his colleagues.

Jo Nesbø’s books have been translated into forty-seven languages. He is the author of the Harry Hole series, as well as The Son, Headhunters, and several children’s books. He has received the Glass Key Award for best Nordic crime novel. He is also a musician, songwriter, and economist and lives in Oslo.

“The pace is relentless. . . . The plot . . . [is] complex without becoming overheated.” —San Antonio Express-News

“The Redeemer rocks! Jo Nesbø is my new favorite thriller writer and Harry Hole my new hero. This book had my pulse in the red zone from start to finish.” —Michael Connelly

“Full of shocking chance and nuance, unforeseen twists and ice-crystal clear views of Oslo in winter.” —The Wall Street Journal

“A tour de force. . . . So tightly constructed and compelling that it’s impossible to put the book down.” —The Globe and Mail (Canada)

“A treat. . . .  Even when you’re positive that the mystery is entirely done and dusted, it invariably turns out that the pragmatic Detective Harry Hole has managed to stay three steps ahead, and there’s more to uncover.” —Time Out

“Nesbø is no ordinary writer. . . . A complex story, impossible to second-guess, which proves that greed, lust and a desire for revenge lurk within the saintliest of folk.” —The Sunday Telegraph

“Rarely does a mystery novel succeed on so many levels, as the intricate plotting explores psychological and theological dimensions that go deeper than standard notions of good and evil. . . . Those with an affinity for the darkest and most literary crime fiction will want to get here as soon as they can.” —Kirkus Reviews (starred review)

“The search for redemption is on—redemption through violence. The deeply flawed Hole is his familiar self: difficult and disrespectful, brilliant and intuitive. . . .  Told in powerful prose, [The Redeemer] never fails to grip.” —Publishers Weekly

“No doubt about it: Nesbø belongs on every crime-fiction fan’s A-list.” —Booklist
or support indie stores by buying on
Copyright © 2020 American Booksellers Association