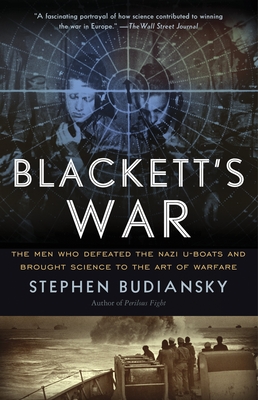 In March 1941, after a year of devastating U-boat attacks, the British War Cabinet turned to an intensely private, bohemian physicist named Patrick Blackett to turn the tide of the naval campaign. Though he is little remembered today, Blackett did as much as anyone to defeat Nazi Germany, by revolutionizing the Allied anti-submarine effort through the disciplined, systematic implementation of simple mathematics and probability theory. This is the story of how British and American civilian intellectuals helped change the nature of twentieth-century warfare, by convincing disbelieving military brass to trust the new field of operational research.


Praise For Blackett's War: The Men Who Defeated the Nazi U-Boats and Brought Science to the Art of Warfare Warfare…

“A fascinating portrayal of how science contributed to winning the war in Europe.”
—The Wall Street Journal

“Lively and enlightening. . . . Budiansky knowingly and entertainingly re-creates the almost constant struggle between hidebound military traditionalists and the clever civilians who saved them.”
—The Washington Post

“Budiansky has mastered the difficulties of the story, making it very readable and compelling . . . an important work.”
—New York Journal of Books

“The little known history of a linchpin in the Allies’ victory over the Nazis: Patrick Blackett. . . . For military history and science fans alike.”
—Publishers Weekly

Stephen Budiansky is the author of seventeen books about military history, intelligence and espionage, science, the natural world, and other subjects. His most recent books are Code Warriors: NSA’s Codebreakers and the Secret Intelligence War Against the Soviet Union and Mad Music: Charles Ives, the Nostalgic Rebel.

Budiansky's writing has appeared in The Atlantic, the New York Times magazine and op-ed pages, the Wall Street Journal, the Washington Post, The Economist, and many other publications. He is a member of the editorial board of Cryptologia, the scholarly journal of cryptology and intelligence history, and is on the American Heritage Dictionary’s Usage Panel. He lives on a small farm in Loudoun County, Virginia.