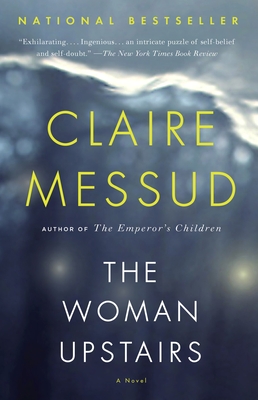 Told with urgency, intimacy, and piercing emotion, this New York Times bestselling novel is the riveting confession of a woman awakened, transformed, and abandoned by a desire for a world beyond her own.

Nora Eldridge is a reliable, but unremarkable, friend and neighbor, always on the fringe of other people’s achievements. But the arrival of the Shahid family—dashing Skandar, a Lebanese scholar, glamorous Sirena, an Italian artist, and their son, Reza—draws her into a complex and exciting new world. Nora’s happiness pushes her beyond her boundaries, until Sirena’s careless ambition leads to a shattering betrayal.

“Fantastic. . . . Burst[ing] with rage and desire. . . . Messud writes about happiness, and about infatuation—about love—more convincingly than any author I’ve encountered in years.” —Lionel Shriver, NPR

“A liberation. Messud’s prose grabs the reader by the collar. . . . In this ingenious, disquieting novel, she has assembled an intricate puzzle of self-belief and self-doubt, showing the peril of seeking your own image in someone else’s distorted mirror—or even, sometimes, in your own.” —The New York Times Book Review

“Riveting. . . . Messud is adept at evoking complex psychological territory. . . . She is interested in the identities that women construct for themselves, and in the maddening chasm that often divides intensity of aspiration from reality of achievement.” —The New Yorker

“The Woman Upstairs dazzles. . . . [Messud is] among our greatest contemporary writers.” —The Miami Herald

“A liberation. Messud’s prose grabs the reader by the collar. . . . She has assembled an intricate puzzle of self-belief and self-doubt, showing the peril of seeking your own image in someone else’s distorted mirror—or even, sometimes, in your own.” —The New York Times Book Review

“Exhilarating. . . . After the final powerful paragraphs, in which Nora howls in galvanized fury, throw it down and have a drink, or a dreamless nap. Don’t be surprised if you then pick it back up and start all over again. A” —Entertainment Weekly

“Mesmerizing. . . . While it was Messud’s achingly beautiful characters crystallizing midlife that drew me in, it was her grotesque portrait of an inner life free to swell, untethered to the realities of children, a spouse and a mortgage that made me think.” —The Huffington Post

“Corrosively funny. . . . At a time at which there seems to be plenty for creative women to be angry about, Nora’s rant feels refreshing.”— Vogue

“Engrossing. . . . Think of [Nora] as the woman who leans out: the A student who puts others’ needs first. . . . Through the ensuing drama, which includes one of the more shocking betrayals in recent fiction, Messud raises questions about women’s still-circumscribed roles and the price of success.” —People (A People’s Pick)

“A supremely well-crafted page-turner with a shocker of an ending.” —The Boston Globe

“[Messud has] a literary critic’s knack for marshaling and reverberating themes and, most crucially, a broad and deep empathy. . . . The Woman Upstairs is first-rate: It asks unsettling, unanswerable questions.” —The Denver Post

“[Messud] knows how to make fiction out of the clash of civilizations. Her heroines . . . inhabit the inky space between continents, physical and generational. . . . The Woman Upstairs is not a pretty read, but that is precisely what makes it so hard to put down.” —The Economist

“[Here] are tart meditations on the creative impulse and the artistic ego, on the interplay between reality and fantasy and the often-pitiful limits of human communication. . . . Smoldering.” —Bloomberg Businessweek

“Spellbinding, psychologically acute. . . . How much of Nora’s fantasy is true . . . is the real subject of Messud’s novel. . . . Exquisitely rendered.” —Milwaukee Journal Sentinel

“Hypnotic. . . . In Nora, Messud has conjured a self-contradictory yet acutely familiar character; we’ve all met someone like her, if we aren’t like her ourselves. . . . Nora does not become monstrous or pathological or even absurd. This, in a way, is her tragedy.” —Salon

“Messud is a tremendously smart, accomplished writer. . . . What the novel does, in spades, is give a voiceless woman a chance to howl.” —The Christian Science Monitor

“Bracing. . . . In this fierce, feminist novel, the reader serves as Nora’s confessor, and it’s a pleasurable job to listen to someone so eloquent, whose insights about how women are valued in society and art are sharp and righteous.” —Dallas News

Claire Messud’s The Emperor’s Children, was a New York Times, Los Angeles Times, and Washington Post Best Book of the Year. Her first novel, When the World Was Steady, and her book of novellas, The Hunters, were both finalists for the PEN/Faulkner Award; and her second novel, The Last Life, was a Publishers Weekly Best Book of the Year and Editor’s Choice at The Village Voice. All four books were named New York Times Notable Books of the Year. Messud has been awarded Guggenheim and Radcliffe Fellowships and the Strauss Living Award from the American Academy of Arts and Letters. She lives in Cambridge, Massachusetts, with her husband and children.