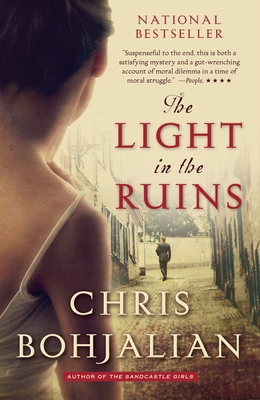 The Light in the Ruins (Vintage Contemporaries)

1943: Tucked away in the idyllic hills of Tuscany, the Rosatis, an Italian family of noble lineage, believe that the walls of their ancient villa will keep them safe from the war raging across Europe. But when two soldiers—a German and an Italian—arrive at their doorstep asking to see an ancient Etruscan burial site, the Rosatis’ bucolic tranquility is shattered.

1955: Serafina Bettini, an investigator with the Florence Police Department, has successfully hidden her tragic scars from WWII, at least until she’s assigned to a gruesome new case—a serial killer who is targeting the remaining members of the Rosati family one by one. Soon, she will find herself digging into past secrets that will reveal a breathtaking story of moral paradox, human frailty, and the mysterious ways of the heart.

Praise For The Light in the Ruins (Vintage Contemporaries)…

“Suspenseful to the end, this is both a satisfying mystery and a gut-wrenching account of moral dilemma in a time of moral struggle.”
—People, 4 Stars

“Brilliantly crafted. . . . Will tear your heart out.”
—The Washington Post

“Addictive, fast-paced. . . . Fling open the shutters. Settle in a comfortable chair. Lock the doors. Then turn to the first page of The Light in the Ruins and let the shadows in.”
—The Philadelphia Inquirer

“At the heart of a good novel is a good story, and this story is a doozy. Bohjalian expertly weaves together a tale of how [WWII] split Italy between the people who willingly collaborated with the Germans and the ones who did not.”
—St. Louis Post-Dispatch

“An intriguing tale of Bohjalian complexity . . . . Portrays life in German-occupied Italy with historical detail but gives it a human face.”
—The Miami Herald

“A spellbinding mix of history and mystery.”
—Parade magazine

“Brilliant. . . . A page-turner that the reader will not soon forget.”
—BookPage

“Hypnotic and harrowing, a mesmerizing read. . . . Run—don’t walk—to the bookstore for this gem.”
—The Free Lance-Star (Fredericksburg, VA)

“Historic fiction at its very finest. . . . Not to be missed.”
—The Louisville Courier-Journal

“A masterpiece. . . . A terrific read that will transport both long-time fans and newcomers back in time to one of the most turbulent periods in Italian history.
—Bookreporter

“Bohjalian has a well-honed ability to keep his reader guessing.”
—The Pittsburgh Post-Gazette

“Gives readers a look at the murderous atmosphere of fascist Italy, a warped circumstance that reverberated years after the war ended.”
—San Antonio Express-News

“The Light in the Ruins offers an engaging story that unspools in such a way as to keep the reader with her nose to the pages long after the light has actually faded.”
—The New York Journal of Books

“A taut, suspenseful page-turner. . . . Bohjalian effortlessly turns a work of historical fiction into a breathless whodunit.”
—The Armenian Weekly

“Chilling. . . . A gifted storyteller, Bohjalian provides his readers with yet another engaging book—a murder mystery that keeps you guessing right up to the end.”
—The Missourian

“Stunning. . . . Bohjalian specializes in the suspense created when people are cut off, physically and emotionally, from society.”
—Tucson Weekly

“A riveting re-creation of a time and place long gone, but not forgotten.”
—Shelf Awareness

“A tale so deftly conceived it . . . transported me into the starkly efficient mind of an Eisenhower-era killer, then to hills of Tuscany during the heat of World War II. . . . It’s almost impossible not to be enthralled by this suspenseful saga, a heady mix of compromised morality, betrayal, murderous revenge and ill-advised romantic entanglement.”
—Patricia Smith, The Washington Independent Review of Books

Chris Bohjalian is the author of twenty books, including The Guest Room; Close Your Eyes, Hold Hands; The Sandcastle Girls; Skeletons at the Feast; The Double Bind; and Midwives which was a number one New York Times bestseller and a selection of Oprah’s Book Club. Chris’s work has been translated into more than thirty languages, and three novels have become movies (Secrets of Eden, Midwives, and Past the Bleachers). Chris lives in Vermont and can be found at www.chrisbohjalian.com or on Facebook, Instagram, Twitter, Litsy, and Goodreads.
Loading...
or
Not Currently Available for Direct Purchase