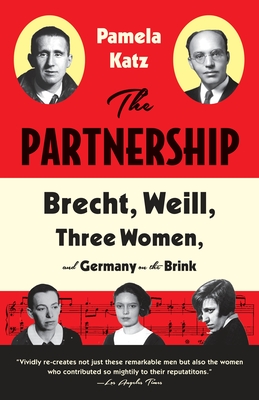 This fascinating portrait of two of the most brilliant theater artists of the twentieth century—and the women who made their work possible—is set against the explosive years of the Weimar Republic.

Among the most outsized personalities of the sizzling, decadent period between the Great War and the Nazis’ rise to power were the renegade poet Bertolt Brecht and the avant-garde composer Kurt Weill. These two young geniuses and the three women vital to their work—actresses Lotte Lenya and Helene Weigel and writer Elisabeth Hauptmann—joined talents to create the theatrical masterworks The Threepenny Opera and The Rise and Fall of the City of Mahagonny, only to split in rancor as their culture cracked open and their differences became irreconcilable. The Partnership is the first book to tell the full story of one of the most important creative collaborations of the last century, and the first to give full credit to the women who contributed their enormous gifts. Theirs is a thrilling story of artistic daring entwined with sexual freedom during the Weimar Republic’s most fevered years, a time when art and politics and society were inextricably mixed.


Praise For The Partnership: Brecht, Weill, Three Women, and Germany on the Brink…

"Readable, engaging and fair-minded. . . . Vividly re-creates not just these remarkable men but also the women who contributed so mightily to their reputations.” —Los Angeles Times

“Katz restores the women to their proper place in the story, with levity, strong characterization, and beguiling descriptions of an interwar German milieu crackling with politics, art, and a sense of possibility.”  —The New Yorker

“[Katz’s] work as a novelist and screenwriter helps her keep the pacing swift and the prose dynamic—the chapters on the creation of The Threepenny Opera are almost unbearably suspenseful. . . . She offers a real and empathetic sense of how Brecht and Weill walked and spoke and dressed.” —The New York Times

“Katz richly conjures the domestic, class, social, and political environs in which Brecht and Weill developed. . . . Through Katz’s insightful and penetrating prose, they all blaze and dazzle as they did in life.” —Booklist

“Katz is extremely good at capturing the centrality of Lenya, Hauptmann, and Weigel in the creation of Brecht and Weill’s collaborations. . . . Katz’s group biography . . . may make it possible to love and fear Brecht anew.” —Bookforum

“[Katz] clearly identifies the stakes of Brecht and Weill’s joint project, connecting it to the historical tumults unfolding around them.” —San Francisco Chronicle

“The culture of Weimar Germany is at its most provocative and profound in this scintillating portrait of its leading theatrical luminaries.... Katz gives an uproarious view of the ferment of interwar Berlin’s theatrical avant-garde, with Brecht’s tantrums, power plays, preening demands, and ideological conceits. But she also takes seriously the artistic and political ideas that drove Brecht and Weill to their innovations (and eventually estranged them). The result is a thoughtful, entertaining recreation of a watershed moment in 20th-century theater.” —Publishers Weekly

PAMELA KATZ is a screenwriter and novelist whose most notable works are films made in collaboration with legendary director Margarethe von Trotta, including Rosenstrasse; The Other Woman; and most recently Hannah Arendt, which received international acclaim, and was selected as one of the New York Times’ Top Ten Films of 2013. Katz teaches screenwriting at NYU's Tisch Graduate Film Program and lives with her family in New York City and Berlin.