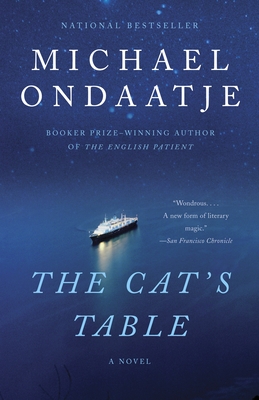 “In a story of intricate delicacy and beauty, Ondaatje not only tells the wondrous story of three boys at sea -- a journey that takes them each from one world to another and into the realm of adult ways and mysteries -- but also one that has the reader in thrall to what it is to look back and remember. The Cat's Table is a luscious, bittersweet rumination on imagination, memory, and place, and what we find by reclaiming what we've lost.”
— Rick Simonson, The Elliott Bay Book Company, Seattle, WA
View the List

“In a story of intricate delicacy and beauty, Ondaatje not only tells the wondrous tale of three boys at sea -- a journey that takes them each from one world to another and into the realm of adult ways and mysteries -- but also one that has the reader in thrall to what it is to look back and remember. The Cat's Table is a luscious, bittersweet rumination on imagination, memory, and place, and what we find by reclaiming what we've lost.”
— Rick Simonson, The Elliott Bay Book Company, Seattle, WA
View the List

In the early 1950s, an eleven-year-old boy in Colombo boards a ship bound for England. At mealtimes he is seated at the “cat’s table”—as far from the Captain’s Table as can be—with a ragtag group of “insignificant” adults and two other boys, Cassius and Ramadhin. As the ship crosses the Indian Ocean, the boys tumble from one adventure to another, bursting all over the place like freed mercury. But there are other diversions as well: they are first exposed to the magical worlds of jazz, women, and literature by their eccentric fellow travelers, and together they spy on a shackled prisoner, his crime and fate a galvanizing mystery that will haunt them forever. By turns poignant and electrifying, The Cat’s Table is a spellbinding story about the magical, often forbidden, discoveries of childhood, and a lifelong journey that begins unexpectedly with a spectacular sea voyage.

“Mesmerizing. . . . As he did in his great novel, The English Patient, Ondaatje conjures images that pull strangers into the vivid rooms of his imagination, their detail illumined by his words.” —The New York Times Book Review

“Lithe and quietly profound: a tale about the magic of adolescence and the passing strangers who help tip us into adulthood in ways we don’t become aware of until much later.” —The Washington Post

“Enthralling and poignant. . . . A captivating reminder that it can take decades to comprehend the past, let alone to make amends with it.” —The Seattle Times

“To capture truly any moment of life is an achievement of art. To find captured, in a single work, such disparate experiences—of youth and age, of action and reflection, of innocence and experience—is a rare pleasure. If each of Ondaatje’s novels is like a new flower, then this one smells particularly sweet.” —Claire Messud, The New York Review of Books

“For my money, Michael Ondaatje is the greatest living writer in the English language. . . . The wide-eyed love of the world and its wonders, the kindness he offers to his characters and readers, the elegant lyricism of his sentences, the joy of storytelling—all that is great in his other books is fully present in The Cat’s Table. . . . Mr. Ondaatje restores belief in the beauty and power of literature and, by extension, of humanity. In this dark, terrible world, The Cat’s Table has healing powers.” —Aleksandar Hemon, WSJ.com

“Ondaatje teaches us that the most marvelous sights are those most often overlooked. It's a lesson that turns this supple story, like the meals at the cat's table, into a feast.” —Los Angeles Times

“A lovely, shimmering book. . . . Ondaatje succeeds so well in capturing the anticipation and inquisitiveness of boyhood.” —Janet Maslin, The New York Times

“A great master may have written his finest book in a long career of fine books.” —Alan Heathcock, Salon

“Ondaatje brings all his literary trademarks to The Cat’s Table, from luminous prose to an amazing sense of economy. He makes every character, image and line resonate like a tuning fork. . . . Elegant and elegiac, The Cat’s Table is the author’s most intimate work.” —The Miami Herald

“Michael Ondaatje has written some of the most inimitable works in the English language; The Cat's Table yet again dignifies literature in every important way possible. This novel is a completely original orchestration of a coming-of-age story, memoir, maritime adventure as powerful as Conrad or Stevenson. The lyricism of the prose is astonishing.” —Howard Norman, The Globe and Mail (Toronto)

“A gorgeous piece of writing. . . . Ondaatje has always been capable of conjuring up mesmerizing images to draw in a reader, but with The Cat’s Table he holds back just enough so the lyricism doesn’t overwhelm the story.” —The Christian Science Monitor

“A joy and a lark to read. . . . . The Cat’s Table expertly strums the cords of autobiography without overdoing it. As a result [the book] vibrates with the borrowed intimacy of real life.” —The Boston Globe

“Elegant and beautiful . . . As in Anil’s Ghost, The Cat’s Table employs a deceptively light touch, hiding a carefully constructed and tender hymn to the enigma of journey.” —The Independent (London)

“The Cat’s Table is just as skillfully wrought as Ondaatje’s magnum opus [The English Patient], but its picaresque childhood adventure gives it a special power and intimacy. . . . He is a master at creating characters, whom he chooses to present, memorably, as individuals. This choice is of a piece with the freshness and originality that are the hallmarks of The Cat’s Table.” —The Wall Street Journal

“Impressive. . . . Wonderful. . . . The beauty of Ondaatje’s writing is in its swift accuracy; it sings with the simple precision of the gaze. . . . Richly enjoyable, often very funny,and gleams like a really smart liner on a sunny day.” —Philip Hensher, The Daily Telegraph (London)

“Ondaajte couldn’t write a banal sentence if he tried. . . . . On its surface, The Cat’s Table may be a magically real reworking of a classic boy’s adventure tale. Deep down, it has the poignancy of a life’s summation.” —Pico Iyer, Time

“Mr. Ondaatje’s greatest talents lie in simply constructed, minimalist descriptions. His images are so meticulously created that the most obvious statements present themselves as sublime realizations. He doesn’t disappoint.” —Pittsburgh Post-Gazette

“Ondaatje is justly recognized as a master of literary craft. . . . The novel tells of a journey from childhood to the adult world, as well as a passage from the homeland to another country, something of a Dantean experience.” —Annie Proulx, The Guardian (UK)

“Elegant, evocative. . . . Whatever its autobiographical roots, there’s a strong sense that this story—one with echoes of Conrad and Kipling—is a tale Michael Ondaatje someday was destined to tell. It’s a pleasure for us, his readers, to share in that telling.” —Bookreporter.com

“[Ondaatje’s] sentences have a sonorous capacity, a soft but urgent tone that coaxes rather than demands attention. Acrobatics are eschewed for a supple, precise flexibility. It's a gift shared by other English-language writers who spent significant time surrounded by diverse tongues: E.M. Forster, for example, and Graham Greene.” —The Denver Post

The epigraph is taken from the short story “Youth” by Joseph Conrad: “And this is how I see the East…. I see it always from a small boat—not a light, not a stir, not a sound. We conversed in low whispers, as if afraid to wake up the land…. It is all in that moment when I opened my young eyes on it. I came upon it from a tussle with the sea.” How does this set up the major themes of The Cat’s Table?

How is the voyage itself a metaphor for childhood?

Why do you think the opening passages of the book are told in third person?

We are 133 pages into the novel before Ondaatje gives us an idea of what year it is. How does he use time—or the sense of timelessness—to propel the story?

The anonymity of ocean travel and the sense that board ship we know only what others want us to know about them come into play at several points in the novel. What is Ondaatje saying about identity?

For several characters—the three boys and Emily among them—the journey represents a loss of innocence. For whom does it have the greatest impact

Discuss the importance of some of the seemingly minor characters at the table: Mr. Mazappa, Mr. Fonseka, Mr. Nevil. What do they contribute to the story?

“What is interesting and important happens mostly in secret, in places where there is no power,” the narrator realizes (page 75). “Nothing much of lasting value ever happens at the head table, held together by a familiar rhetoric. Those who already have power continue to glide along the familiar rut they have made for themselves.” How does this prove true over the course of the novel?

How do the narrator’s experiences breaking and entering with the Baron change his way of looking at the world?

Discuss the three boys’ experience during the typhoon. How does it affect their friendship and their attitude toward authority figures?

How does the death of Sir Hector factor into the larger story?

On page 155, the narrator refers to Ramadhin as “the saint of our clandestine family.” What does he mean?

When describing the collapse of his marriage, the narrator says, “Massi said that sometimes, when things overwhelmed me, there was a trick or a habit I had: I turned myself into something that did not belong anywhere. I trusted nothing I was told, not even what I witnessed” (page 203). What made him behave this way? How did it affect his marriage?

On page 208, the narrator tells us about a master class given by the filmmaker Luc Dardenne in which “he spoke of how viewers of his films should not assume they understood everything about the characters. As members of an audience we should never feel ourselves wiser than they; we do not have more knowledge than the characters have about themselves.” Why did Ondaatje give us this warning, so far into the novel? What is he telling us?

What was your reaction to the revelations about Miss Lasqueti?

How do you think her letter to Emily might have changed the events on board the Oronsay? Why didn’t she send it?

Miss Laqueti signs off her letter, “‘Despair young and never look back,’ an Irishman said. And this is what I did” (page 231). What does she mean?

Discuss Emily’s relationship with Asuntha. Did she, as the narrator suggests on page 251, see herself in the deaf girl?

When Emily says to the narrator, “I don’t think you can love me into safety,” (page 250), to what is she referring? What is the danger, decades after the voyage?

The narrator wishes to protect Emily, Cassius has Asuntha, and Ramadhin has Heather Cave. “What happened that the three of us had a desire to protect others seemingly less secure than ourselves?” he asks on page 262. How would you answer that question?