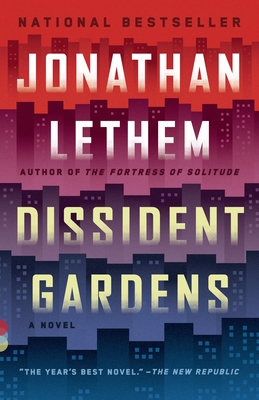 A New York Times Notable Book
One of the Best Books of the Year: Chicago Tribune, Village Voice, The Globe and Mail

Jonathan Lethem, winner of the National Book Critics Circle Award for Fiction and the MacArthur Fellowship whose writing has been called “as ambitious as [Norman] Mailer, as funny as Philip Roth, and as stinging as Bob Dylan” (Los Angeles Times), returns with an epic yet intimate family saga.

Rose Zimmer, the aptly nicknamed Red Queen of Sunnyside, Queens, is an unreconstructed Communist who savages neighbors, family, and political comrades with the ferocity of her personality and the absolutism of her beliefs. Her equally passionate and willful daughter, Miriam, flees Rose’s influence for the dawning counterculture of Greenwich Village. Despite their differences, they share a power to enchant the men in their lives: Rose’s aristocratic German Jewish husband, Albert; her feckless chess hustler cousin, Lenny; Cicero Lookins, the brilliant son of her black cop lover; Miriam’s (slightly fraudulent) Irish folksinger husband, Tommy Gogan; and their bewildered son, Sergius. Through Lethem’s vivid storytelling we come to understand that the personal may be political, but the political, even more so, is personal.

“As ambitious as Mailer, as funny as Philip Roth and as stinging as Bob Dylan . . . Dissident Gardens shows Lethem in full possession of his powers as a novelist, as he smoothly segues between historical periods and internal worlds . . . Erudite, beautifully written, wise, compassionate, heartbreaking and pretty much devoid of nostalgia.” —Los Angeles Times

“Dissident Gardens seamlessly weaves together three generations, yet it doesn't broadcast itself as a multigenerational epic, nor is it afflicted by the desire to pose as the next great American novel. It's an intimate book.” —The New York Times Book Review

“The writing soars. . . . Lethem can riff with the best, spinning knockout lines that make you stop and stare . . . while you admire a sentence’s every turn.” —The Seattle Times

“An assured, expert literary performance by one of our most important writers. . . . Magnificent.” —Los Angeles Review of Books

“Brilliantly caustic and deeply moving. . . . Rather than a history book writ small, we realize, this is a powerful family portrait writ large.” —Haaretz (Israel)

“A brilliant, funny, compendious novel at whose heart lies a sharp, slim blade of thought and style. It is the quality of [Lethem’s] perception, his empathy, that makes this material new: that sharpness is the sharpness of a mind at work, re-radicalizing a radical era with notions both literary and political that are outside itself.” —The Guardian (London)

“A righteous, stupendously involving novel about the personal toll of failed political movements and the perplexing obstacles to doing good. . . . Lethem is breathtaking in this torrent of potent voices, searing ironies, pop-culture allusions, and tragicomic complexities.” —Booklist (starred review)

“The cast is a heady, swirly mix of fascinating, lonely people. Lethem's writing, as always, packs a witty punch. . . . As illuminating of 20th-century American history as it is of the human burden of overcoming alienation.” —Publishers Weekly

JONATHAN LETHEM is the New York Times bestselling author of nine novels, including Chronic City, The Fortress of Solitude, and Motherless Brooklyn, and of the nonfiction collection The Ecstasy of Influence, a National Book Critics Circle Award finalist. A recipient of the MacArthur Fellowship and winner of the National Book Critics Circle Award for Fiction, Lethem’s work has appeared in The New Yorker, Harper’s Magazine, Rolling Stone, Esquire, and The New York Times, among other publications.