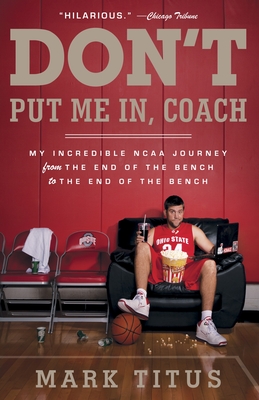 Don't Put Me In, Coach (Paperback)

An irreverent, hilarious insider's look at big-time NCAA basketball, through the eyes of the nation's most famous benchwarmer and author of the popular blog ClubTrillion.com (3.6m visits!). Mark Titus holds the Ohio State record for career wins, and made it to the 2007 national championship game. You would think Titus would be all over the highlight reels. You'd be wrong.

In 2006, Mark Titus arrived on Ohio State's campus as a former high school basketball player who aspired to be an orthopedic surgeon. Somehow, he was added to the elite Buckeye basketball team, given a scholarship, and played alongside seven future NBA players on his way to setting the record for most individual career wins in Ohio State history. Think that's impressive? In four years, he scored a grand total of nine—yes, nine—points.

This book will give readers an uncensored and uproarious look inside an elite NCAA basketball program from Titus's unique perspective. In his four years at the end of the bench, Mark founded his wildly popular blog Club Trillion, became a hero to all guys picked last, and even got scouted by the Harlem Globetrotters. Mark Titus is not your average basketball star. This is a wild and completely true story of the most unlikely career in college basketball. A must-read for all fans of March Madness and college sports!

MARK TITUS's blog, http://clubtrillion.blogspot.com, has recorded over 3.6 million views since its debut in late 2008.  He has been featured in the New York Times, ESPN.com, Yahoo.com, the Associated Press, and the Cleveland Plain Dealer. He has recently attempted to enter the NBA draft and tried out for the Harlem Globetrotters. Titus graduated from Ohio State in 2010, a hero to millions.

"Mark Titus knows a lot of personal secrets of mine. If he revealed any of them in this book, I will kick him right in the testicles. I’m not joking."
-Greg Oden (#1 overall pick in 2007 NBA Draft, 2007 1st Team All-American)

“Of all the players I’ve coached in my career, Mark Titus is one of them.”
-Thad Matta (head basketball coach at Ohio State)

“You want me to give you a quote?  I guess I shouldn’t be surprised.  You’ve been riding my coattails for years, so of course you want to put my name on your book to sell more copies.”
-Evan Turner (#2 overall pick in 2010 NBA Draft, 2010 college basketball National Player of The Year)

"If Mark Titus had been able to play basketball the way he can write, he would have joined his Ohio State team mates in the NBA. No kidding. This is nothing less than a modern-day basketball version of Ball Four, a terrific look behind the locker room door, funny and profane and real. Great stuff."
-Leigh Montville, New York Times bestselling author of Ted Williams and Evel

“As a good-humored book about what Titus calls ‘normal kids who do stupid things’ while playing big-time basketball, Don’t Put Me In, Coach should appeal not just to Buckeyes fans but also to anyone looking for a frank, humanizing peek in to the locker room....A funny read.”
-Sports Illustrated

“For a reminder of the fun that can be had in college sports, turn to Mark Titus...The book, a comic tale of coming to terms with failure, is littered with stories of pranks, jokes, and team hijinks that may turn around that understandably low opinion of college sports. Everybody seems to be having a great time.”
-TheAtlantic.com

“It’s not often we notice a college basketball player who, over his four year career, played a total of 48 minutes in 32 games while racking up just nine points. But when that player happens to be Mark Titus, a Brownsburg, Indiana native who parlayed his benchwarming days at Ohio State University into a blog with nearly 4 million views and a new book titled Don’t Put Me In, Coach, we make exceptions.”
-The Onion’s A.V. Club (Indianapolis)

“Don’t Put Me In, Coach, [is] a scabrously funny look at what it’s like to almost play for a No. 1-ranked NCAA hoops team."
-The Free Lance–Star (Fredericksburg, VA)

"The unique combination of snort-inducing hilarity and insider perspective makes this required reading for younger (or just perpetually immature) hoop heads. A perfect way to pass the time during the tournament’s endless TV timeouts."
-Kirkus

"The Maxim demographic will revel in Titus’s rebellious tales, which come with a heaping portion of snarky, bro-friendly prose, scatological humor, and pop culture references….And under all the pranks and immaturity, Titus is a likable, forthright narrator.”
-Publishers Weekly
or support indie stores by buying on
Copyright © 2020 American Booksellers Association