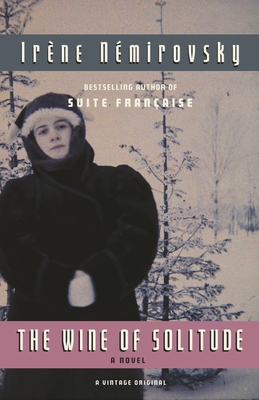 The Wine of Solitude (Vintage International)

Introspective and poignant, The Wine of Solitude is the most autobiographical of all of the novels from the celebrated author of Suite Française.

Beginning in a fictionalized Kiev, The Wine of Solitude follows the Karol family through the Great War and the Russian Revolution, as the young Hélène grows from a dreamy, unhappy child into a strongwilled young woman. From the hot Kiev summers to the cruel winters of St Petersburg and eventually to springtime in Paris, the would-be writer Hélène blossoms, despite her mother’s neglect, into a clear-eyed observer of the life around her. Here is a powerful tale of disillusionment — the story of an upbringing that produces a young woman as hard as a diamond, prepared to wreak a shattering revenge on her mother.

Praise For The Wine of Solitude (Vintage International)…

Praise for The Wine of Solitude:

"A precocity and acuity of perception shine through."
—The New Yorker

“Wonderfully atmospheric . . . . Némirovsky evokes the places of her childhood with a sensuous clarity that shows how much she learned from Tolstoy and Proust. . . . A captivating and searingly honest portrait of the artist as a young woman.”
—The Guardian (London)

"Fiercely brave. . . . [Here is] the birth of a writer, shaped by war and revolution, told with the devastating cynicism of a young woman in a corrupt and greedy social world, where mothers openly flaunt their lovers and children are humored and ignored. . . . The characters are multidimensional."
—Shelf Awareness

“Breathtaking. . . . Némirovsky’s powers of social observation, [her] implacable eye for the nuances of human conduct . . .  make The Wine of Solitude so memorable.”
—The Financial Times

“Stunning. . . . [Némirovsky] wrote, for all to read at last, some of the greatest, most humane and inclusive fiction that conflict has produced.”
—The New York Times Book Review

“Némirovsky’s scope is like that of Tolstoy: She sees the fullness of humanity and its tenuous arrangements and manages to put them together with a tone that is affectionate, patient, and relentlessly honest.”
—O: The Oprah Magazine

Irène Némirovsky was born in Kiev in 1903 into a wealthy banking family and immigrated to France during the Russian Revolution. After attending the Sorbonne in Paris, she began to write and swiftly achieved success with David Golder, which was followed by more than a dozen other books. Throughout her lifetime she published widely in French newspapers and literary journals. She died in Auschwitz in 1942. More than sixty years later, Suite Française was published posthumously for the first time in 2006.
Loading...
or
Not Currently Available for Direct Purchase