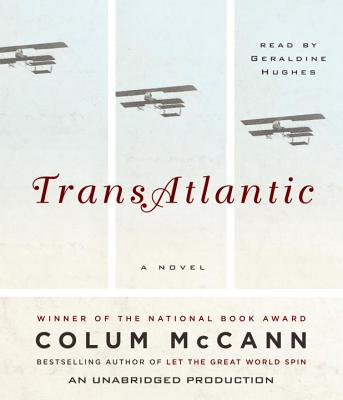 NEW YORK TIMES BESTSELLER - LONGLISTED FOR THE MAN BOOKER PRIZE - NAMED ONE OF THE BEST BOOKS OF THE YEAR BY KIRKUS REVIEWS In the National Book Award-winning Let the Great World Spin, Colum McCann thrilled readers with a marvelous high-wire act of fiction that The New York Times Book Review called "an emotional tour de force." Now McCann demonstrates once again why he is one of the most acclaimed and essential authors of his generation with a soaring novel that spans continents, leaps centuries, and unites a cast of deftly rendered characters, both real and imagined. Newfoundland, 1919. Two aviators--Jack Alcock and Arthur Brown--set course for Ireland as they attempt the first nonstop flight across the Atlantic Ocean, placing their trust in a modified bomber to heal the wounds of the Great War. Dublin, 1845 and '46. On an international lecture tour in support of his subversive autobiography, Frederick Douglass finds the Irish people sympathetic to the abolitionist cause--despite the fact that, as famine ravages the countryside, the poor suffer from hardships that are astonishing even to an American slave. New York, 1998. Leaving behind a young wife and newborn child, Senator George Mitchell departs for Belfast, where it has fallen to him, the son of an Irish-American father and a Lebanese mother, to shepherd Northern Ireland's notoriously bitter and volatile peace talks to an uncertain conclusion. These three iconic crossings are connected by a series of remarkable women whose personal stories are caught up in the swells of history. Beginning with Irish housemaid Lily Duggan, who crosses paths with Frederick Douglass, the novel follows her daughter and granddaughter, Emily and Lottie, and culminates in the present-day story of Hannah Carson, in whom all the hopes and failures of previous generations live on. From the loughs of Ireland to the flatlands of Missouri and the windswept coast of Newfoundland, their journeys mirror the progress and shape of history. They each learn that even the most unassuming moments of grace have a way of rippling through time, space, and memory. The most mature work yet from an incomparable storyteller, TransAtlantic is a profound meditation on identity and history in a wide world that grows somehow smaller and more wondrous with each passing year. Praise for TransAtlantic "A dazzlingly talented author's latest high-wire act . . . Reminiscent of the finest work of Michael Ondaatje and Michael Cunningham, TransAtlantic is Colum McCann's most penetrating novel yet."--O: The Oprah Magazine

"One of the greatest pleasures of TransAtlantic is how provisional it makes history feel, how intimate, and intensely real. . . . Here is the uncanny thing McCann finds again and again about the miraculous: that it is inseparable from the everyday."--The Boston Globe "Ingenious . . . The intricate connections McCann] has crafted between the stories of his women and our men seem] written in air, in water, and--given that his subject is the confluence of Irish and American history--in blood."--Esquire "Another sweeping, beautifully constructed tapestry of life . . . Reading McCann is a rare joy."--The Seattle Times "Entrancing . . . McCann folds his epic meticulously into this relatively slim volume like an accordion; each pleat holds music--elation and sorrow."--The Denver Post From the Hardcover edition.

“What distinguishes TransAtlantic from [Colum] McCann’s earlier work isn’t the stunning language or the psychological acuity or the humor and imagination on display—all of that has been there before. It’s the sheer ambition, the audacity to imagine within the same novel the experience of Frederick Douglass in 1845 . . . then the first nonstop trans-Atlantic flight in 1919 . . . then to leap into the near-present and embody the former senator George Mitchell, . . . knitting through and around them the stories of four generations of women.”—The New York Times Magazine

“One of the greatest pleasures of TransAtlantic is how provisional it makes history feel, how intimate, and intensely real. . . . Here is the uncanny thing McCann finds again and again about the miraculous: that it is inseparable from the everyday.”—The Boston Globe

“Ingenious . . . The intricate connections [McCann] has crafted between the stories of his women and our men [seem] written in air, in water, and—given that his subject is the confluence of Irish and American history—in blood.”—Esquire

“Entrancing . . . McCann folds his epic meticulously into this relatively slim volume like an accordion; each pleat holds music—elation and sorrow.”—The Denver Post

Colum McCann is the internationally bestselling author of the novels Let the Great World Spin, Zoli, Dancer, This Side of Brightness, and Songdogs, as well as two critically acclaimed story collections. His fiction has been published in thirty-five languages. He has received many honors, including the National Book Award, the International IMPAC Dublin Literary Award, a Chevalier des Arts et Lettres from the French government, and the Ireland Fund of Monaco Literary Award in Memory of Princess Grace. He has been named one of Esquire's "Best & Brightest," and his short film Everything in This Country Must was nominated for an Oscar in 2005. A contributor to The New Yorker, The New York Times Magazine, The Atlantic Monthly, and The Paris Review, he teaches in the Hunter College MFA Creative Writing Program. He lives in New York City with his wife and their three children.
Loading...
or
Not Currently Available for Direct Purchase