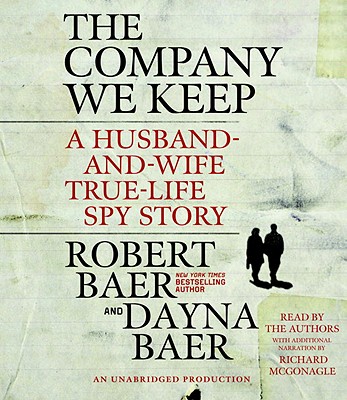 The Company We Keep (Compact Disc)

Robert Baer was known inside the CIA as perhaps the best operative working the Middle East. But if his career was all that a spy might aspire to, his personal life was a brutal illustration of everything a spy is asked to sacrifice.

Dayna Williamson thought of herself as just an ordinary California girl. But she was always looking to get closer to the edge. When she joined the CIA, she was initially tasked with Agency background checks, but she quickly distinguished herself as someone who could thrive in the field. Tapped to serve in some of the world’s most dangerous places, she discovered an inner strength and resourcefulness she’d never known—but she also came to see that the spy life exacts a heavy toll.

When Bob and Dayna met on a mission in Sarajevo, it wasn’t love at first sight. But there was something there, a spark. And as the danger escalated and their affection for each other grew, they realized it was time to leave “the Company,” to somehow rediscover the people they’d once been. As worldly as they both were, the couple didn’t realize at first that turning in their Agency ID cards would not be enough to put their covert past behind.

Robert Baer is the author of three "New York Times" bestsellers involving the CIA: "See No Evil" (which was the basis for the acclaimed film "Syriana"), "Sleeping with the Devil," and "The Devil We Know." He has become one of the most authoritative voices on American intelligence and frequently appears as a media commentator.

Dayna Baer, before leaving the Agency to settle down with Bob, was also an accomplished CIA operative.


"Funny, frightening, ironic, and deeply moving, this is an utterly engrossing thrill ride through the hall of mirrors that is modern espionage…A wonderful book."--Richard North Patterson, New York Times bestselling author of Degree of Guilt and In the Name of Honor


"Provides a spot-on and compelling portrait of real life inside the CIA; the periods of boredom and frustration loudly punctuated by fast-moving and sometimes frightening, sometimes amusing intelligence operations.  Bob and Dayna Baer are the real deal and they beautifully capture the murky world they lived and worked in for years."--Valerie Plame Wilson, New York Times bestselling author of Fair Game