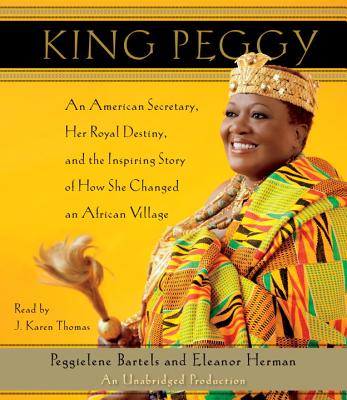 An American Secretary, Her Royal Destiny, and the Inspiring Story of How She Changed an African Village

The charming real-life fairy tale of an American secretary who discovers she has been chosen king of an impoverished fishing village on the west coast of Africa. King Peggy has the sweetness and quirkiness of The No. 1 Ladies' Detective Agency series and the hopeful sense of possibility of Half the Sky.

King Peggy chronicles the astonishing journey of an American secretary who suddenly finds herself king to a town of 7,000 souls on Ghana's central coast, half a world away. Upon arriving for her crowning ceremony in beautiful Otuam, she discovers the dire reality: there's no running water, no doctor, and no high school, and many of the village elders are stealing the town's funds. To make matters worse, her uncle (the late king) sits in a morgue awaiting a proper funeral in the royal palace, which is in ruins. The longer she waits to bury him, the more she risks incurring the wrath of her ancestors. Peggy's first two years as king of Otuam unfold in a way that is stranger than fiction. In the end, a deeply traditional African town has been uplifted by the ambitions of its headstrong, decidedly modern female king. And in changing Otuam, Peggy is herself transformed, from an ordinary secretary to the heart and hope of her community.


Praise For King Peggy: An American Secretary, Her Royal Destiny, and the Inspiring Story of How She Changed an African Village…


“This is an astonishing and wonderful book about a real life Mma Ramotswe. It is an utter joy.”

—Alexander McCall Smith, author of The No. 1 Ladies Detective Agency

PEGGIELENE BARTELS was born in Ghana in 1953 and moved to Washington, DC, in her early twenties to work at Ghana's embassy. She became an American citizen in 1997. In 2008, she was chosen to be king of Otuam, a Ghanaian village of 7,000 people on the west coast of Africa. She lives in Silver Spring, Maryland, still works at the embassy, and spends several weeks each year in Ghana.

ELEANOR HERMAN is the author of three books of women's history, including the "New York Times" bestseller "Sex with Kings" and "Sex with the Queen." Her profile of Peggy was a cover story for the "Washington Post Magazine." She lives in McLean, Virginia.
Loading...
or
Not Currently Available for Direct Purchase