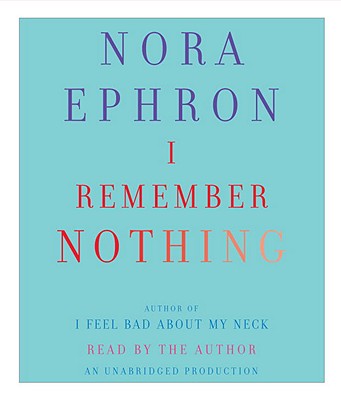 Nora Ephron returns with her first audiobook since the astounding success of I Feel Bad About My Neck, taking a cool, hard, hilarious look at the past, the present, and the future, bemoaning the vicissitudes of modern life, and recalling with her signature clarity and wisdom everything she hasn t (yet) forgotten.
Ephron writes about falling hard for a way of life ( Journalism: A Love Story ) and about breaking up even harder with the men in her life ( The D Word ); lists Twenty-five Things People Have a Shocking Capacity to Be Surprised by Over and Over Again ( There is no explaining the stock market but people try; Cary Grant was Jewish; Men cheat ); reveals the alarming evolution, a decade after she wrote and directed You ve Got Mail, of her relationship with her in-box ( The Six Stages of E-Mail ); and asks the age-old question, which came first, the chicken soup or the cold? All the while, she gives candid, edgy voice to everything women who have reached a certain age have been thinking . . . but rarely acknowledging.
Filled with insights and observations that instantly ring true and could have come only from Nora Ephron I Remember Nothing is pure joy.


Praise For I Remember Nothing: And Other Reflections…