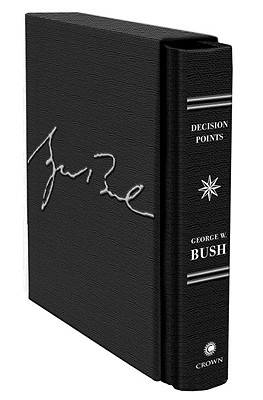 The limited, deluxe edition of Decision Points is certain to be a collector’s item and a highly sought after piece of Presidential history.

Each copy will be hand signed by President Bush. The book itself will be printed on high-quality, acid-free paper and bound in a full cloth case with foil stamping. In addition, the book will have a ribbon marker and a special color photo frontispiece not found in the regular hardcover edition of Decision Points. Each book is individually hand numbered, packed into slipcases, and shrinkwrapped.

Decision Points is the extraordinary memoir of America’s 43rd president. Shattering the conventions of political autobiography, George W. Bush offers a strikingly candid journey through the defining decisions of his life.

In gripping, never-before-heard detail, President Bush brings readers inside the Texas Governor’s Mansion on the night of the hotly contested 2000 election; aboard Air Force One on 9/11, in the hours after America’s most devastating attack since Pearl Harbor; at the head of the table in the Situation Room in the moments before launching the war in Iraq; and behind the Oval Office desk for his historic and controversial decisions on the financial crisis, Hurricane Katrina, Afghanistan, Iran, and other issues that have shaped the first decade of the 21st century.

George W. Bush is the 43rd President of the United States.
Loading...
or
Not Currently Available for Direct Purchase