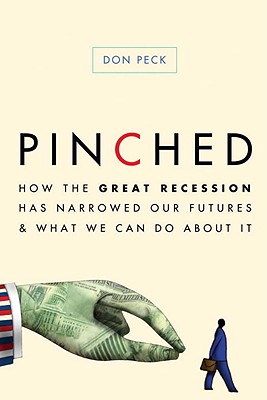 The Great Recession is not done with us yet. While the most acute part of the economic crisis is past, the recession's most significant impact on American life still lies in the future. The personal, social, and cultural changes that result from severe economic shocks build and manifest themselves only slowly. But history shows us that, ultimately, shocks this severe profoundly alter the character of society.

Don Peck’s Pinched, a fascinating and harrowing exploration of our dramatic economic climate, keenly observes how the recession has changed the places we live, the work we do, and even who we are—and details the transformations that are yet to come.  Every class and every generation will be affected: newly minted college graduates, blue-collar men, affluent professionals, exurban families, elite financiers, inner city youth, middle-class retirees.

This was not an ordinary recession, and ordinary responses will not fully end it. The crash has shifted the course of the economy.  In its aftermath, the middle class is shrinking faster, wealth is becoming more concentrated, twenty-somethings are sinking, and working-class families and communities are changing in unsavory ways.

We sit today between two eras, buffeted, anxious, and uncertain of the future.  Through vivid reporting and lucid argument, Peck helps us make sense of how our society has changed, and why so many people are still struggling.

The answers to these questions reveal a new way forward for America.  The country has endured periods like this one before, and has emerged all the stronger from them; adaptation and reinvention have been perhaps the nation’s best and most enduring traits.  The time is ripe for another such reinvention.  Pinched lays out the principles and public actions that can help us pull it off.

Don Peck is a Deputy Managing Editor at the "Atlantic, " where he has worked as an editor for six years. He covers economics and culture, among other subjects, and commissions many of the magazine's feature stories.

Before he became a journalist, Mr. Peck was a principal at the Advisory Board Company, a large strategic research firm and management consultancy. He has a B.A. in government modified with economics from Dartmouth College and a Masters of Public Affairs with a focus on international development from the Woodrow Wilson School at Princeton University. He lives with his wife Meghan in Washington, DC.

Praise For Pinched: How the Great Recession Has Narrowed Our Futures and What We Can Do About It…

“Books attempting to explain the economic situation are a dime a dozen these days, but my pennies go to Pinched. Shorn of jargon, this tightly written book distinguishes itself from the crowd…It's great to find a book that identifies solutions, not just problems.” --Chicago Tribune (Editor's Choice)

“Outstanding. PINCHED has the potential to be a defining book about this era economically, how we should think about it, and what we should do about it. It does a better, clearer job of explaining this painful period than anything I've read recently. Don Peck puts together the pieces of today’s puzzle—the gender effects, the generational effects, the political ramifications of a slowing economy—in a way that makes obvious sense, once he has pointed them out. This is a wonderfully helpful and clarifying book.” --James Fallows

"A gripping and sobering account of the true costs of the financial boom-bust cycle, full of sensible analysis and level-headed suggestions. Policymakers on both sides of the aisle will ignore this book at their peril. Read PINCHED and run for office yourself." --Simon Johnson, Professor of Entrepreneurship at MIT Sloan School of Management, and co-author of 13 Bankers: The Wall Street Takeover and The Next Financial Meltdown

"Every era has its politico-economic text. Don Peck may well have written the one for the post financial crisis era.  His concerns for what a weak economy will leave in its wake are proper and pressing. We would make wiser policy if every policymaker read this brilliant book." --Larry Summers

"PINCHED is a must read for anyone trying to understand not just the causes but the long-running consequences of the Great Recession. Don Peck shows how the economic crisis is reshuffling our economic and social order, and how devastating the effects of long-term joblessness and diminished expectations can be. He outlines a new, broader but more focused strategy that puts job creation and economic recovery at the center of the nation's agenda." --Richard Florida, author of The Great Reset and The Rise of the Creative Class

"Compelling and disturbing ...Peck explains, with coolness and concision, the brutal new realities faced by Americans without college degrees ... He makes a compelling case that the most pressing problem the U.S. faces is not the bloated national debt, but the hollowing of the middle class." --Jeffrey Goldberg, Bloomberg