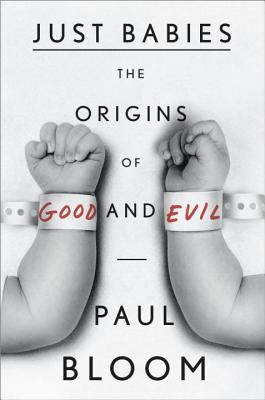 The Origins of Good and Evil

A leading cognitive scientist argues that a deep sense of good and evil is bred in the bone.

From John Locke to Sigmund Freud, philosophers and psychologists have long believed that we begin life as blank moral slates. Many of us take for granted that babies are born selfish and that it is the role of society—and especially parents—to transform them from little sociopaths into civilized beings. In Just Babies, Paul Bloom argues that humans are in fact hardwired with a sense of morality. Drawing on groundbreaking research at Yale, Bloom demonstrates that, even before they can speak or walk, babies judge the goodness and badness of others’ actions; feel empathy and compassion; act to soothe those in distress; and have a rudimentary sense of justice.

Still, this innate morality is limited, sometimes tragically. We are naturally hostile to strangers, prone to parochialism and bigotry. Bringing together insights from psychology, behavioral economics, evolutionary biology, and philosophy, Bloom explores how we have come to surpass these limitations. Along the way, he examines the morality of chimpanzees, violent psychopaths, religious extremists, and Ivy League professors, and explores our often puzzling moral feelings about sex, politics, religion, and race.
In his analysis of the morality of children and adults, Bloom rejects the fashionable view that our moral decisions are driven mainly by gut feelings and unconscious biases. Just as reason has driven our great scientific discoveries, he argues, it is reason and deliberation that makes possible our moral discoveries, such as the wrongness of slavery. Ultimately, it is through our imagination, our compassion, and our uniquely human capacity for rational thought that we can transcend the primitive sense of morality we were born with, becoming more than just babies.

Praise For Just Babies: The Origins of Good and Evil…

"Insightful [and] frequently funny…Bloom manages to translate abstract principles into clear, readable prose, making complex material accessible to the layperson without oversimplifying. His voice is witty, engaging, and candidly quirky…Reveals striking truths about the nature of morality and humanity."
--Boston Globe

"Bloom has a talent for distilling scholarly work (his and others’) into accessible, appealing prose...He writes with both an authority and an openness that suggest he would enjoy a lively discussion with any skeptics."
--Washington Post

"Bloom — an elegant, lucid and economical writer — makes an excellent guide...He’s an observer and evaluator who’s not ideologically invested in any one interpretation of the evidence… If he takes exception with moral philosophy’s fixation on depersonalized thought problems, he is just as leery of the notion that morality is entirely based on feelings derived from our evolutionary past. The hard-wired stuff is just the beginning, Bloom points out, and reason has an essential part to play in our moral development, as well."
--Laura Miller, Salon

"In a lively, accessible style, Bloom…draws on research into adults from many societies, including the extant hunter-gatherer tribes. And he tackles the moral claims of philosophy and religion, arguing that we understand how the 'amoral force of natural selection' may have instilled the foundations for moral thought and action."
--New Scientist

"Brisk and authoritative...[Bloom’s] discussion of disgust is particularly good…the experiments he describes are nifty."
--Nature

"One comes to Paul Bloom for his unfailingly brilliant psychological research; one stays for the wise and relaxed way he writes about it."
--Jim Holt, author of Why Does the World Exist?: An Existential Detective Story

"The rich cognitive and moral life of babies is among the most fascinating discoveries of twenty-first-century psychology. Paul Bloom explains how this work illuminates human nature, and does it with his trademark clarity, depth, discernment, and graceful style."
--Steven Pinker, professor of psychology, Harvard University; author of How the Mind Works

"Take a tour through the latest and most amazing research in child psychology, and come back with a better understanding of the strange things adults do. Bloom shows us how a first rate scientist integrates conflicting findings, broad scholarship, and deep humanity to draw a nuanced and often surprising  portrait of human nature, with all its beauty, horror, and wonder."
--Jonathan Haidt, Thomas Cooley Professor of Ethical Leadership, New York University Stern School of Business; author of The Happiness Hypothesis and The Righteous Mind

"Just Babies is an extremely important book. Today it is received wisdom that morality is unreal: our evolutionary instincts are purely selfish. We're also told that human society is built on irrational impulses, that reason and choice count for nothing.  A leading experimental psychologist, but also a skilled reader of philosophy, Bloom authoritatively punctures both of these errors.  Lively and deftly argued, with admirably fair treatment of opposing views, Just Babies shows that humans inherit a rich basis for morality, but also some disturbing tendencies.  Making the best of the good and doing what we can to inhibit the bad is the job of history, culture and reason."
--Martha C. Nussbaum, Ernst Freund Distinguished Service Professor of Law and Ethics, University of Chicago; author of Political Emotions

"Wonderfully clear and entertaining…If you want to understand yourself, your children, and the psychopath in the next cubicle better than you do at present--read this book."
--Sam Harris, author of Free Will and The End of Faith

"Just Babies is a fascinating, original exploration of our sense of right and wrong. Bloom and his colleagues plumb the mysteries of morality by playing games with babies, and in this witty, elegant book, he demonstrates the profound lessons we can gain from their responses. After finishing it, you'll never look at an infant the same way again."
--Carl Zimmer, author of Soul Made Flesh: The Discovery of the Brain and How it Changed the World

"In Just Babies, Paul Bloom provides a wonderful, in-depth look at how our morality develops from infancy onward, making the strong case for the subtle interplay of genes and environment in the way we turn out -- a must for social science enthusiasts and parents."
--Dan Ariely, James B. Duke Professor of Psychology and Behavioral Economics;
author of Predictably Irrational

"Paul Bloom's engaging explorations of the moral preferences of infants set the stage for a book that isn't really ‘just babies’ because it goes deeply into the nature of morality itself, for all of us.  This is a book for everyone who wants to know more about the kind of moral beings we are."
--Peter Singer, Ira W. DeCamp Professor of Bioethics, Princeton University; author of The Life You Can Save

"Paul Bloom has such an interesting mind, and it's a rare treat to follow as he tracks the origins of human morality. With clarity and wit, Bloom shows that babies have an incredible amount to teach us—and in these masterful pages, the lessons are full of surprise and delight."
--Emily Bazelon, author of Sticks and Stones: Defeating the Culture of Bullying and Rediscovering the Power of Character and Empathy

"’The Origins of Good and Evil’ is an ambitious subtitle, but this book earns it. Paul Bloom combines graceful, witty writing with intellectual rigor to produce a compelling account of how and why people are so wonderful and so horrible.  Drawing on his own pioneering work and the work of many other psychologists, Bloom shows that, from infancy on, the imprint of our creator, natural selection, is evident: we are in some sense moral animals, complete with compassion and a sense of justice, but our “moral compass” can be self-serving, sometimes to gruesome effect. Still, transcendence of a sort is possible; Bloom rightly emphasizes the edifying power of reason and self-reflection, and notes how these tools of enlightenment have led to genuine moral progress. This book, by fostering self-reflection, is itself a tool of enlightenment, and can help humanity take another step toward the good."
--Robert Wright, author of The Moral Animal and The Evolution of God

"Just Babies is exactly the combination of penetrating insight, cutting-edge science, and elegant prose that readers have come to expect from one of psychology's best writers and sharpest minds."
--Daniel Gilbert, Edgar Pierce Professor of Psychology, Harvard University;
author of Stumbling on Happiness

"Paul Bloom is a scientist who knows how to tell a fascinating and charming story. As a new parent, I found Just Babies not only full of insights into my son's developing moral sense but also a great pleasure to read."
--Joshua Foer, author of Moonwalking with Einstein: The Art and Science of Remembering Everything

"That morality is bred into us is clear from the evolutionary continuity with other species as well as the reactions of young infants long before we can expect moral reasoning and logic. In his lively, personable style Paul Bloom reviews the spectacular new evidence for the early emergence of the human sense of right and wrong."
--Frans de Waal, author of The Bonobo and the Atheist; C. H. Candler Professor and Director of the Living Links Center at the Yerkes Primate Center

"Without God does anything go? No, because we have an evolved moral nature that gives us a sense of right and wrong. But when does this sense develop? Thanks to Paul Bloom and this remarkable and important book, we have an answer—very early childhood. Just Babies is a vital contribution to the scientific study of morality that fills in a major gap in our understanding of human nature, and as a bonus it's a riveting read!"
--Michael Shermer, publisher of Skeptic magazine and author of
The Science of Good and Evil

"Paul Bloom is one of the best psychologist-writers today. In Just Babies he combines hard data with charming anecdote and incisive analysis to explore one of the most profound questions that's ever confronted mankind: how we become moral beings. He makes an erudite and impassioned case for the primacy of deliberation and reason in our lives–a truth given short shrift in pop psychology."
--Sally Satel, M.D., coauthor of Brainwashed: The Seductive Appeal of Mindless Neuroscience

"With wit and passion, Yale psychology professor Bloom (How Pleasure Works) explores the nature of morality, drawing on current research in psychology, evolutionary biology, and philosophy while discussing which factors appear to be innate and which are culturally determined. Bloom convincingly establishes that the nature of morality is open to scientific investigation."
--Publishers Weekly

"With his account sharply tuned to the general reader, Bloom skims along assuredly through the research. He uses the findings to nimbly springboard into discussions of philosophy and psychology, exploring the bases of large moral debates, such as acceptable sexual practices or when killing is justified. Of interest both to parents curious about the inner lives of their little ones and to those seeking a more general, thought-provoking examination of morality, the book offers remarkable insight into our first baby steps as moral beings."
--Booklist

Paul Bloom is the Brooks and Suzanne Ragen Professor of Psychology at Yale University. He is the author or editor of six books, including the acclaimed" How Pleasure Works." He has won numerous awards for his research and teaching, and his scientific and popular articles have appeared in "The New York Times Magazine, Nature, The""New Yorker, The""Atlantic, Science, Slate," "The Best American Science Writing," and many other publications. He lives in New Haven with his wife and two sons. Visit his website at paulbloomatyale.com and follow him on Twitter at @paulbloomatyale.
Loading...
or
Not Currently Available for Direct Purchase