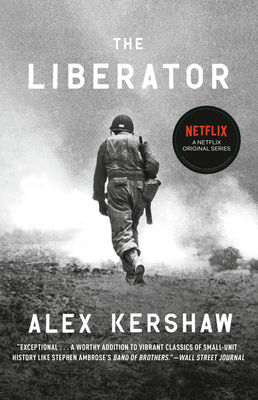 The untold story of the bloodiest and most dramatic march to victory of the Second World War—soon to be a Netflix original series starring Jose Miguel Vasquez, Bryan Hibbard, and Bradley James

Written with Alex Kershaw's trademark narrative drive and vivid immediacy, The Liberator traces the remarkable battlefield journey of maverick U.S. Army officer Felix Sparks through the Allied liberation of Europe—from the first landing in Italy to the final death throes of the Third Reich.

Over five hundred bloody days, Sparks and his infantry unit battled from the beaches of Sicily through the mountains of Italy and France, ultimately enduring bitter and desperate winter combat against the die-hard SS on the Fatherland's borders. Having miraculously survived the long, bloody march across Europe, Sparks was selected to lead a final charge to Bavaria, where he and his men experienced some of the most intense street fighting suffered by Americans in World War II.

And when he finally arrived at the gates of Dachau, Sparks confronted scenes that robbed the mind of reason—and put his humanity to the ultimate test.

Praise For The Liberator: One World War II Soldier's 500-Day Odyssey from the Beaches of Sicily to the Gates of Dachau…

“Exceptional….The Liberator balances evocative prose with attention to detail and is a worthy addition to vibrant classics of small-unit history like Stephen Ambrose's Band of Brothers….From the desert of Arizona to the moral crypt of Dachau, Mr. Kershaw's book bears witness to the hell that America's innocents came through, and the humanity they struggled to keep in their hearts.” —Wall Street Journal

“A revealing portrait of a man who led by example and suffered a deep emotional wound with the loss of each soldier under his command….The Liberator is a worthwhile and fast-paced examination of a dedicated officer navigating — and somehow surviving — World War II.” —Washington Post

“Kershaw’s writing is seamless. He incorporates information from a vast array of sources, but it works – you get a sense of the different voices coming into the story….A gripping read.” —Minneapolis Star Tribune

“A history of the American war experience in miniature, from the hard-charging enthusiasm of the initial landings to the clear-eyed horror of the liberation of the concentration camps….An uncynical, patriotic look at our finest hour.” —The Daily Beast

“Kershaw has ensured that individuals and entire battles that might have been lost to history, or overshadowed by more ‘important’ people and events, have their own place in the vast, protean tale of World War II....Where Kershaw succeeds, and where The Liberator is at its most riveting and satisfying, is in its delineation of Felix Sparks as a good man that other men would follow into Hell — and in its unblinking, matter-of-fact description, in battle after battle, of just how gruesome, terrifying and dehumanizing that Hell could be.” —Time.com

“Kershaw’s accounts of the battles Sparks survived are clear and grisly and gripping.” —World War II

“[Kershaw] is a captivating narrator, hammering home the chaos and carnage of war, sparing no sensory detail to paint a cohesive picture.  [His] portrayal of his subject (based on interviews with Sparks, who died in 2007, and other survivors) makes for a riveting, almost epic tale of a larger-than-life, underappreciated figure.” —Publishers Weekly (starred review)

“This engrossing wartime narrative offers a fresh look at the European campaign and an intimate sense of the war’s toll on individual participants.” —Kirkus Reviews

“Alex Kershaw's gripping account of one man's wartime experiences has both the intimacy of a diary and the epic reach of a military history.  The Liberator reminds us of the complexity and moral ambiguity of the Second World War.” —Amanda Foreman, author of A World on Fire

“A searing, brilliantly told story of the heroism and horror of war, Alex Kershaw’s The Liberator is a book that’s impossible to put down. A must read for anyone who loved Band of Brothers.” —Lynne Olson, author of Citizens of London

“Alex Kershaw, long acclaimed for his terse, lightning-fast narratives of true wartime action and heroism, reaches his full maturity with this sweeping saga of a legendary infantry unit and the leader who spurred it to glory.” —Ron Powers, co-author of Flags of Our Fathers

“A literary tour de force.  Kershaw brilliantly captures the pathos and untold perspective of WWII through the eyes of one of its most courageous, unsung officers – a great leader, who always put his men first.  The Liberator is a compelling, cinematic story of the highest order." —Patrick K. O’Donnell, combat historian and author of Dog Company

ALEX KERSHAW is the New York Times bestselling author of several books on World War II, including The Longest Winter and The Bedford Boys. He lives in Williamstown, Massachusetts.
or support indie stores by buying on