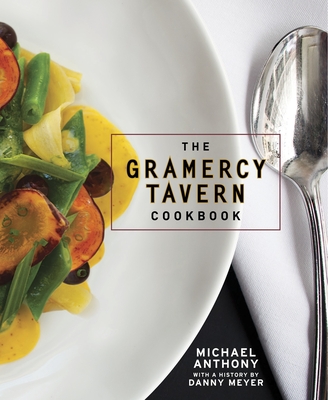 One of the best New York restaurants, a culinary landmark that has been changing the face of American dining for decades, now shares its beloved recipes, stories, and pioneering philosophy.

Opened in 1994, Gramercy Tavern is more than just a restaurant. It has become a New York institution earning dozens of accolades, including six James Beard awards. Its impeccable, fiercely seasonal cooking, welcoming atmosphere, and steadfast commitment to hospitality are unparalleled. The restaurant has its own magic—a sense of community and generosity—that’s captured in these pages for everyone to bring home and savor through 125 recipes.

Restaurateur Danny Meyer’s intimate story of how Gramercy was born sets the stage for executive chef-partner Michael Anthony’s appealing approach to American cooking and recipes that highlight the bounty of the farmer’s market. With 200 sumptuous photographs and personal stories, The Gramercy Tavern Cookbook also gives an insider look into the things that make this establishment unique, from the artists who have shaped its décor and ambience, to the staff members who share what it is like to be a part of this close-knit restaurant family. Above all, food lovers will be inspired to make memorable meals and bring the warmth of Gramercy into their homes.

Praise For The Gramercy Tavern Cookbook…

"Gramercy Tavern, the cozy-but-chic mainstay on East 20th Street, exudes so much wood-fired warmth that it qualifies as downtown's pied-a-terre. It's where you want to loaf and linger—and keep eating. The new Gramercy Tavern Cookbook pays tribute to that accomplishment and, of course, to its chef, Michael Anthony, and his deeply and deliciously American fare, like roasted oysters and apple pie, and monkey bread and bacon Cheddar biscuits." -The New York Times

"At least as suitable for coffee-table display as any of those volumes, The Gramercy Tavern Cookbook is the one to bestow upon loved ones who actually want to spend time at the stove. Chef Michael Anthony translates his contemporary-classic dishes into user-friendly recipes fit for weeknight suppers as well as festive meals, while the tale of the nearly 20-year-old Manhattan restaurant unfolds in accompanying anecdotes." -The Wall Street Journal

"By design, it lets you into the chef’s imagination, teaches composition, and frees you to think about ways to reintegrate high quality basics." -Esquire

"With its generous size and mouthwatering photographs, it looks like a coffee table fixture, but this book from the famed Manhattan restaurant is meant for true home cooking. Corn soup with honey and a julienne of shiso leaves, earthy mushroom lasagne topped with crispy garlic, and other recipes are as approachable as they are elegant." -Saveur

"With its generous size and mouthwatering photographs, it looks like a coffee table fixture, but this book from the famed Manhattan restaurant is meant for true home cooking. Corn soup with honey and a julienne of shiso leaves, earthy mushroom lasagne topped with crispy garlic, and other recipes are as approachable as they are elegant." -Saveur

“After twenty years, Danny Meyer's beloved New York restaurant Gramercy Tavern finally got a cookbook, and it was worth the wait. Chef Michael Anthony wrote a slightly upscale version of an all-purpose cookbook, this is your go-to for dressed up chicken soup, carrot cake, braised pork, seafood chowder, homemade pasta and more.” –Eater.com

"All of these food experts seem determined to impart their accumulated wisdom to interested readers and aspiring chefs, demystifying the cuisines they specialize in and placing them within reach of home cooks. Sidebars in Michael Anthony's Gramercy Tavern Cookbook, for example, read like notes from a professor in the margins of a term paper." -The Village Voice

"Restauranteur Danny Meyer's Gramercy Tavern is a perennial favorite; the book is full of seasonal hits like seafood chowder with squash for fall." -Food Network Magazine

"The recipes are interspersed with super-useful sections on pickling, pan-roasting fish, making pie crust and more instruction from the earnest, encouraging chef-educator." -Food and Wine

"Michael Anthony's beloved farm-to-table recipes are featured along with profiles of the unsung people behind the celebrated New York restaurant." -Details

"...this cookbook presents recipes designed to bring the warmth of the Gramercy Tavern to the home cook. With fare that reflects the 'buoyant tone' and 'just dropped in' atmosphere of the tavern and dining room, the authors encourage cooks to approach their restaurant recipes as inspirational points of departure to produce dishes that 'look great by virtue of the beauty of the ingredients.'' —Publishers Weekly

MICHAEL ANTHONY is the executive chef-partner of Gramercy Tavern. In 2012, he received the James Beard Award for Best Chef: NYC. Originally from Cincinnati, Ohio, Michael received degrees from Indiana University and Paris’s celebrated Ferrandi culinary school. He has cooked in Japan and in some of the finest French restaurants, including Jacques Cagna, Michel Guérard, L’Arpège, L’Astrance, and, in New York, Daniel. Prior to joining Gramercy Tavern in 2006, he was the executive chef of Blue Hill at Stone Barns.

DANNY MEYER is chief executive officer and founder of Union Square Hospitality Group, which includes Union Square Cafe, Gramercy Tavern, Blue Smoke, Shake Shack, Union Square Events, The Modern, Maialino, Untitled, and North End Grill. He has long served on the boards of Share Our Strength and City Harvest and is on the executive committees of NYC & Co, Union Square Partnership, and the Madison Square Park Conservancy. He is the author of the New York Times bestseller Setting the Table.
Loading...
or support indie stores by buying on