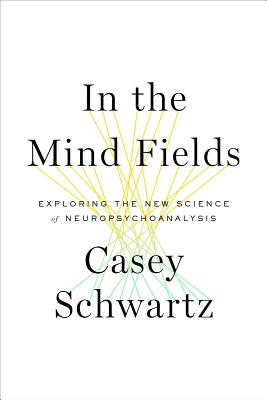 In the Mind Fields

Exploring the New Science of Neuropsychoanalysis

“Everywhere I looked it seemed that we were being defined by what our brains were doing . . . Everywhere, there were hucksters and geniuses, all trying to colonize the new world of the brain.”

“I’d never been a science person,” Casey Schwartz declares at the beginning of her far-reaching quest to understand how we define ourselves. Nevertheless, in her early twenties, she was drawn to the possibilities and insights emerging on the frontiers of brain research. Over the next decade she set out to meet the neuroscientists and psychoanalysts engaged with such questions as, How do we perceive the world, make decisions, or remember our childhoods? Are we using the brain? Or the mind? To what extent is it both?

Schwartz discovered that neuroscience and psychoanalysis are engaged in a conflict almost as old as the disciplines themselves. Many neuroscientists, if they think about psychoanalysis at all, view it as outdated, arbitrary, and subjective, while many psychoanalysts decry neuroscience as lacking the true texture of human experience. With passion and humor, Schwartz explores the surprising efforts to find common ground. Beginning among the tweedy Freudians of North London and proceeding to laboratories, consulting rooms, and hospital bedsides around the world, Schwartz introduces a cast of pioneering characters, from Mark Solms, a South African neuropsychoanalyst with an expertise in dreams, to David Silvers, a psychoanalyst practicing in New York, to Harry, a man who has lost his use of language in the wake of a stroke but who nevertheless benefits from Silvers’s analytic technique. In the Mind Fields is a riveting view of the convictions, obsessions, and struggles of those who dedicate themselves to the effort to understand the mysteries of inner life.

Praise For In the Mind Fields: Exploring the New Science of Neuropsychoanalysis…

The New York Times
"Ms. Schwartz is onto something . . . she’s refreshingly immune to neuroscience’s charms . . . Just as Ms. Schwartz sees what’s suspect about neuroscience, she sees what’s still valuable—or better yet, romantic and fabulous—about Freud, celebrating his nerve, humor and visionary theory of mind. She reminds us that he was far looser and more generous than history remembers him (or than his successors have ever been), letting his dog Yofi tear through his office during his sessions and writing 'spry, affectionate notes' to his favorite patients. Ms. Schwartz, in other words, is skeptical where others are swooning and swooning where others are skeptical. These are wonderful qualities in a science writer . . . Schwartz writes with imagination and wit." --Jennifer Senior

Chicago Tribune
“Fascinating . . . a refreshingly honest read. [Schwartz] is open-minded, exploratory, cautious, and sceptical at once . . . both a smart exploration of a complicated subject and an excellent read. Freud would be proud.”

Los Angeles Times
“Thoughtful . . . calls to mind Janet Malcolm’s riveting book, ‘In the Freud Archives' . . . [a] thorough review of key neuroscientific findings over the last few decades . . . Indeed, it’s hard to dispute her contention that if brain researchers plan to conquer the scourge of mental illness, they will have to pay more attention to the mind.”

Library Journal
“The journey presented in this sharp narrative makes somewhat lofty topics accessible as seems to be a trend in modern science writing. Ultimately, the author’s knowledge gives those interested in brain studies and the process of thought an exciting case study of sorts. Schwartz engages the reader with humorous stories of the leading professionals she encounters, providing a thorough, thoughtful account.”

Scott Stossel, editor of The Atlantic magazine and the author of My Age of Anxiety: Fear, Hope, Dread, and the Search for Peace of Mind
“In the Mind Fields is a brilliant and enthralling exploration of a scientific and philosophical conundrum that has preoccupied thinkers from Descartes to Freud to Oliver Sacks: the relationship between brain and mind. Weaving together intellectual history, science reporting, bits of memoir, and a deep reservoir of humane sympathy, Casey Schwartz brings readers along with her on a bracing quest to bridge psychoanalysis and neuroscience. A work of remarkable brio, wisdom, and wit, with gems of insight shimmering on nearly every page.”

Alan Alda
“If psychoanalysis studies the brain as mind and neuroscience studies the mind as brain, can they somehow learn to work together to help us understand who we are? Casey Schwartz takes us on a charming, personal quest to reconcile hard to reconcile views—watching, fascinated, as the brain, maybe the most unfathomable thing in the universe, tries to fathom itself.”

Andrew Solomon, author of Far from the Tree
“For too long, we’ve had to choose between the mind and the brain, between a psychodynamic vocabulary and a neuroscientific one.  In this generous, insightful, witty book, Casey Schwartz looks at the steep cost of that dichotomous construct.  Her meticulous reporting and lucid reasoning resolve seemingly intractable dialectics with the sheer grace of common sense.”

Siri Hustvedt, author of The Shaking Woman or A History of My Nerves
“Skeptics beware. Casey Schwartz’s reports from the world of neuropsychoanalysis are anything but dull. Her nimble prose, mordant observations, penetrating comments, and unerring sense for the absurd as well as the poignant, make In the Mind Fields a deeply engaging book about a fascinating new discipline.”

CASEY SCHWARTZ has worked as a staff writer at Newsweek/The Daily Beast, where she covered neuroscience, psychology, and psychiatry. Her writing has also appeared in The New York Times and The New York Sun. She lives in New York City.
Loading...
or
Not Currently Available for Direct Purchase