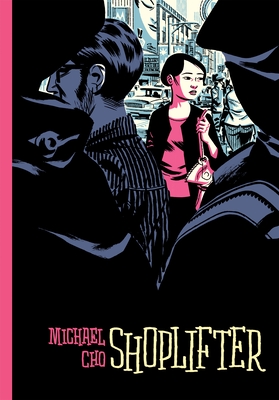 Studying English literature in college, she imagined writing a successful novel and leading the idealized life of an author. But she’s been working at the same advertising agency for the past five years and the only thing she’s written is . . . copy. Corrina knows there must be more to life, but and she faces the same question as does everyone in her generation: how to find it?

Here is the brilliant debut graphic novel about a young woman’s search for happiness and self-fulfillment in the big city.

(With two-color illustrations throughout.)

“In fewer than 100 pages, Cho crafts a complicated and sympathetic protagonist whose plight rings true for any who have experienced the abiding loneliness that is living alone in the big city as a twenty-something. This is quite an achievement. . . . Magnificent.” —Graphic Novel Reporter

“With his debut book Shoplifter, Michael Cho joins the likes of Anya Ulinich (who's been credited for sketching a sort of Girls for divorcees), Jillian Tamaki (whose This One Summer follows an overweight teen), and Marjane Satrapi, the genius behind Persepolis.” —Huffington Post

“A beautifully illustrated character piece about a young woman in an unnamed city at a crossroads in her life, coming to terms with her unhappiness and destructive impulses.” —Comic Book Resources

“Shoplifter’s a short book—90 pages or so, and the concise length serves it well—there’s no flab here, no room for distracted interjections, no complaints. It may be slight, but it’s elegantly executed . . . assured and cogent. Visually, it’s as attractive as you’d expect from Cho, alternatively surrounding Corinna with beautiful rendered city and then leaving her swathes of space; she’s as lost in one as the other. The rose and black color scheme is a gorgeous combination that does much to imbue the narrative with a sense of warmth and closeness, and also to dispel any notions of otherwise suggested tone. It’s rare that you read something so evenly handled yet characterful and uplifting, but Shoplifter manages it.” —ComicsAlliance

“Cho is a subtle storyteller, setting Shoplifter in a city reminiscent of Toronto, although it remains unnamed. As in his previous book, Back Alleys and Urban Landscapes, the city becomes something of a character, lonely but also full of possibility. This, along with his at times sparing use of language, gives the graphic novel an air of quiet desperation, of a decision about to be made.”  —Los Angeles Times

“Shoplifter exists as a ‘slice of life’ story. . . . Where it stands above other works is in its execution and especially in Cho’s terrific and illustrative artwork. . . . His first graphic novel effort knocks it out of the park . . . with its humor, sense of style, and near flawless execution of its simple narrative.” —Examiner.com

“A funny and touching portrait of urban angst. What’s exceptional is the eye-catching art in two colors, black and rose. The adept use of black ink delineates but does not complete the outlines of people and buildings; the rose tones shadow and spotlight, subtly drawing attention. Large swatches of rose or black physically define Corinna’s distance, both enforced and self-imposed, from her world. The delicate ink line articulates the facial expressions, and the intricate background and character details tie the narrative together. With its appealing story and quirky heroine, Cho’s debut is a visually electrifying, if minor, tale.” —Publishers Weekly

“Where has Michael Cho been hiding himself? . . . His art is lovely with an art deco, Darwyn Cooke-style approach to the page, detailed with shaded images and dense backgrounds that seem full of people and buildings that nearly seem to jump off his page. There’s a tremendous feeling of life and realism in Cho’s characters; in their small sideways glances and bright eyes, Cho captures the essence of humanity in even the most random of background strangers . . . A memorable tale.” —Comics Bulletin

“Michael Cho’s Shoplifter is the most modern, of-its-time graphic novel I’ve read in a long while.” —Comicsworthreading.com

“Michael Cho’s Shoplifter, his first graphic novel, is a joy to behold—so beautiful it will make all other cartoonists weep with envy.” —Seth, author of Palookaville

MICHAEL CHO is an illustrator, cartoonist, and writer whose previously published work includes Back Alleys and Urban Landscapes, a collection of sketches depicting Toronto’s cityscape. Born in South Korea, he has lived in Canada since he was six.
Loading...
or
Not Currently Available for Direct Purchase