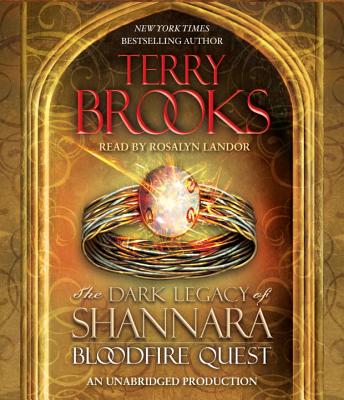 From "New York Times" bestselling author Terry Brooks comes the second thrilling novel in a brand-new trilogy The Dark Legacy of Shannara
The quest for the missing Elfstones has gone badly awry. The Druid Order has been decimated, and its surviving leader and her followers are trapped inside the Forbidding the hellish dimension that imprisons the most dangerous creatures banished from the Four Lands. But now the powerful magic barrier that surrounds the Forbidding is crumbling, and an evil horde is poised to break free . . . unless one young Druid is willing to make the ultimate sacrifice.

“Terry Brooks has been my constant companion over a lifetime of exploring my beloved fantasy genre. I say with all honesty I would not be writing epic fantasy today if not for Shannara. If Tolkien is the grandfather of modern fantasy, Terry Brooks is its favorite uncle.”—Peter V. Brett, New York Times bestselling author of The Daylight War

“The Shannara books were among the first to really capture my imagination. My daydreams and therefore my stories will always owe a debt to Terry Brooks.”—Brandon Mull, #1 New York Times bestselling author of the Beyonders and Fablehaven series

Terry Brooks is the "New York Times" bestselling author of more than thirty books, including the Dark Legacy of Shannara adventure" Wards of Faerie;" the Legends of Shannara novels "Bearers of the Black Staff" and "The Measure of the Magic; "the Genesis of Shannara trilogy: "Armageddon s Children, The Elves of Cintra, "and" The Gypsy Morph; The Sword of Shannara;" the Voyage of the" "Jerle Shannara trilogy: "Ilse Witch, Antrax, "and" Morgawr;" the High Druid of Shannara trilogy: "Jarka Ruus, Tanequil, "and" Straken; "the nonfiction book "Sometimes the Magic Works: Lessons from a Writing Life; "and the novel based upon the screenplay and story by George Lucas, "Star Wars: (r) "Episode I "The Phantom Menace." His novels "Running with the Demon "and" A Knight of the Word" were selected by the "Rocky Mountain News" as two of the best science fiction/fantasy novels of the twentieth century. The author was a practicing attorney for many years but now writes full-time. He lives with his wife, Judine, in the Pacific Northwest."
Loading...
or
Not Currently Available for Direct Purchase