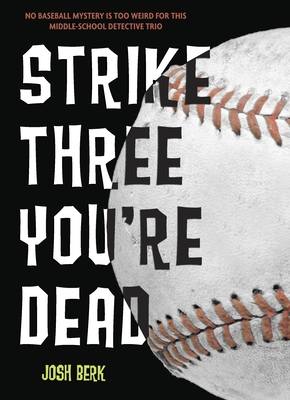 Lenny Norbeck is a die-hard baseball lover. Unfortunately, he's no player himself (according to him, he's "the worst there ever was.") But he'd make a heck of an announcer. He gets a lot of practice sitting with his best friends, Mike and Other Mike, watching Phillies games from their lawn couch—a sweet outdoor TV arrangement Mike's dad hooked them up with. Being a real announcer is his dream, and he gets his chance to prove himself when he enters an "Armchair Announcer" contest and wins. The prize: he gets to be the broadcaster, live, for one inning at a real Phillies game.

The game goes very wrong, though. Before Lenny gets to do his inning, a young, promising pitcher fresh out of the minors literally drops dead on the mound. The official verdict is that he died of a heart attack, but Lenny has a hunch there's something more going on. So he and the Mikes set out to investigate. The suspects are many, and though the trio barks up the wrong tree a few times, they are always right on the heels of the real killer. . . .

JOSH BERK is the author of The Dark Days of Hamburger Halpin and Guy Langman: Crime Scene Procrastinator. He lives in Bethlehem, Pennsylvania, with his wife and two children, and is a children's services librarian at the Allentown Public Library.
or support indie stores by buying on