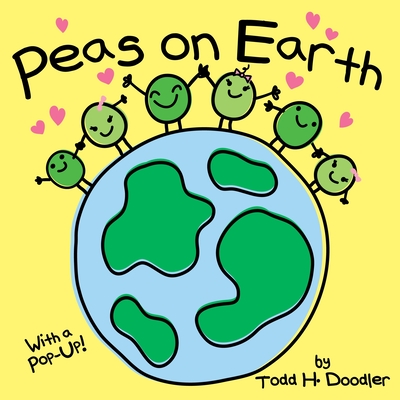 Peas on Earth (Board book)

Peas on Earth uses a simple play on words to portray the basic concepts of peace, harmony, getting along with all kinds of people, and being green in a manner that young kids will grasp. And it will resonate more as they grow older. Adult caregivers will chuckle over the peas/peace references while young children will relate to the important messages about our earth and those of us who live on it.  The artwork is colorful, charming, and perfect for the board book crowd. And, as an added value, there is a simple pop-up at the end of the book.

TODD H. DOODLER is the pen name for Todd H. Goldman, a well-known pop artist and founder of David & Goliath, a company that produces clothing and other merchandise that feature his designs. As a child, Todd dreamed of being a Russian figure skater. Unfortunately for Todd, he could not skate and was not Russian, so he decided to doodle instead. Though he faced discouragement from many, he was determined to turn his love of drawing into a career. Todd launched David & Goliath in 2000 to great success. Todd also sells his work as fine art. He branched out into children's publishing in 2009 and is the author of Animal Soup, The Zoo I Drew, and the Bear in Underwear series.  Todd lives in Los Angeles.
or support indie stores by buying on
Copyright © 2020 American Booksellers Association