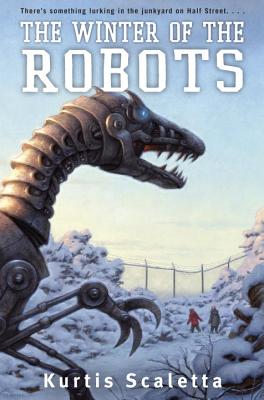 The Winter of the Robots


Jim is tired of being the sidekick to his scientific genius, robot-obsessed, best friend Oliver. So this winter, when it comes time to choose partners for the science fair, Jim dumps Oliver and teams up with a girl instead. Rocky has spotted wild otters down by the river, and her idea is to study them.

But what they discover is bigger—and much more menacing—than fuzzy otters: a hidden junkyard on abandoned Half Street. And as desolate as it may seem, there's something living in the junkyard. Something that won't be contained for long by the rusty fences and mounds of snow. Can Jim and Rocky—along with Oliver and his new science-fair partner—put aside their rivalry and unite their robot-building skills? Whatever is lurking on Half Street is about to meet its match.

Praise For The Winter of the Robots…

Starred Review, Booklist, December 1, 2013:
“Told in a spare, matter-of-fact narrative, this packs the space between the lines with humor, drama, romantic tension, and deftly delivered insight into the characters of a diverse, well developed cast.”

KURTIS SCALETTA is the author of Mudville, a Booklist Top 10 Sports Book for Youth; Mamba Point, which the New York Times Book Review called "entertaining and touching"; and The Tanglewood Terror, a Kids' Indie Next List Selection and winner of the Minnesota Readers' Choice Award. He lives in Minneapolis with his wife and son.
or
Not Currently Available for Direct Purchase