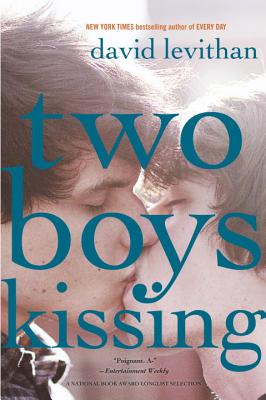 "You have to read this.” —Rainbow Rowell, bestselling author of Eleanor & Park and Carry On

From the New York Times bestselling author of Every Day, this love story of shared humanity and history Hypable calls "an interconnecting web that will leave you emotionally exhausted and absolutely thrilled to have read something so beautiful and unique."

“There are more than two boys kissing in this book, and every one of them will reach your heart. You have to read this.”
- Rainbow Rowell, author of Eleanor & Park

The Washington Post, August 20, 2013:
"Over the years, Levithan has consistently explored new creative territory...'Two Boys Kissing' reveals his command of an intriguing, complex narrative with an unusual point of view: the first-person plural. This 'we' is the combined voice of men who died during the AIDS pandemic several decades ago. As the boys’ stories become more closely entwined and connect in a satisfying finale, the reflections of these 'shadow uncles' lend a quality of retrospection that is rare (and refreshing) in YA literature."

DAVID LEVITHAN is a children’s book editor in New York City and the author of several books for young adults, including Boy Meets Boy, Love Is the Higher Law, and Every Day. He coauthored Will Grayson, Will Grayson with John Green, and Nick & Norah’s Infinite Playlist, Dash & Lily’s Book of Dares, and Naomi and Ely’s No Kiss List with Rachel Cohn.
Loading...
or
Not Currently Available for Direct Purchase