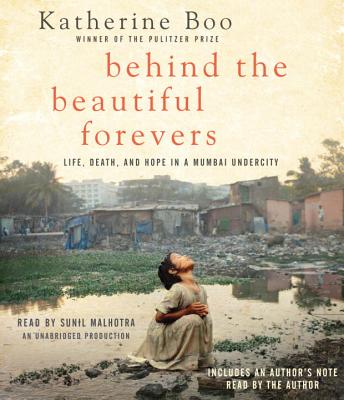 Life, Death, and Hope in a Mumbai Undercity

In this brilliant, breathtaking book by Pulitzer Prize winner Katherine Boo, a bewildering age of global change and inequality is made human through the dramatic story of families striving toward a better life in Annawadi, a makeshift settlement in the shadow of luxury hotels near the Mumbai airport. As India starts to prosper, the residents of Annawadi are electric with hope. Abdul, an enterprising teenager, sees "a fortune beyond counting" in the recyclable garbage that richer people throw away. Meanwhile Asha, a woman of formidable ambition, has identified a shadier route to the middle class. With a little luck, her beautiful daughter, Annawadi's "most-everything girl," might become its first female college graduate. And even the poorest children, like the young thief Kalu, feel themselves inching closer to their dreams. But then Abdul is falsely accused in a shocking tragedy; terror and global recession rock the city; and suppressed tensions over religion, caste, sex, power, and economic envy turn brutal. With intelligence, humor, and deep insight into what connects people to one another in an era of tumultuous change, "Behind the Beautiful Forevers, "based on years of uncompromising reporting, ""carries the reader headlong into one of the twenty-first century's hidden worlds--and into the hearts of families impossible to forget.
Winner of the National Book Award - The PEN/John Kenneth Galbraith Award - The Los Angeles Times Book Prize - The American Academy of Arts and Letters Award - The New York Public Library's Helen Bernstein Book Award
NAMED ONE OF THE TEN BEST BOOKS OF THE YEAR BY
"The New York Times - The Washington Post - O: The Oprah Magazine - USA Today - New York - The Miami Herald - San Francisco Chronicle - Newsday"
" "
NAMED ONE OF THE BEST BOOKS OF THE YEAR BY
"The New Yorker - People - Entertainment Weekly - The Wall Street Journal - The Boston Globe - The Economist - Financial Times - Newsweek"/The Daily Beast" - Foreign Policy - The Seattle Times - The Nation - St. Louis Post-Dispatch - The Denver Post - "Minneapolis" Star Tribune - "Salon" - The Plain Dealer - The Week - Kansas City Star - "Slate" - Time Out New York - Publishers Weekly"
" "
"NEW YORK TIMES" BESTSELLER
"A book of extraordinary intelligence and] humanity . . . beyond groundbreaking."--Junot DIaz, "The New York Times Book Review"
" "
"Reported like Watergate, written like "Great Expectations, "and handily the best international nonfiction in years."--"New York"
"This book is both a tour de force of social justice reportage and a literary masterpiece."--Judges' Citation for the PEN/John Kenneth Galbraith Award
" A] landmark book."--"The Wall Street Journal"
" "
"A triumph of a book."--Amartya Sen
"There are books that change the way you feel and see; this is one of them."--Adrian Nicole LeBlanc
" A] stunning piece of narrative nonfiction . . . Katherine] Boo's prose is electric.""--O: The Oprah Magazine"
" "
"Inspiring, and irresistible . . . Boo's extraordinary achievement is twofold. She shows us how people in the most desperate circumstances can find the resilience to hang on to their humanity. Just as important, she makes us care.""--People.

Praise For Behind the Beautiful Forevers: Life, Death, and Hope in a Mumbai Undercity…

“A tough-minded, inspiring, and irresistible book . . . Boo’s extraordinary achievement is twofold. She shows us how people in the most desperate circumstances can find the resilience to hang on to their humanity. Just as importantly, she makes us care.”—People (four stars)

Katherine Boo is a staff writer at "The New Yorker" and a former reporter and editor for "The" "Washington Post." Her reporting has been awarded a Pulitzer Prize, a MacArthur Genius grant, and a National Magazine Award for Feature Writing. For the last decade, she has divided her time between the United States and India. This is her first book."
Loading...
or
Not Currently Available for Direct Purchase