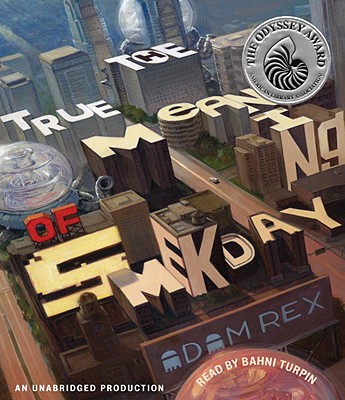 The True Meaning of Smekday (CD-Audio)

It all starts with a school essay. When twelve-year-old Gratuity ("Tip") Tucci is assigned to write five pages on "The True Meaning of Smekday" for the National Time Capsule contest, she's not sure where to begin. When her mom started telling everyone about the messages aliens were sending through a mole on the back of her neck? Maybe on Christmas Eve, when huge, bizarre spaceships descended on the Earth and the aliens - called Boov - abducted her mother? Or when the Boov declared Earth a colony, renamed it "Smekland" (in honor of glorious Captain Smek), and forced all Americans to relocate to Florida via rocketpod? In any case, Gratuity's story is much, much bigger than the assignment. It involves her unlikely friendship with a renegade Boov mechanic named J.Lo.; a futile journey south to find Gratuity's mother at the Happy Mouse Kingdom; a cross-country road trip in a hovercar called Slushious; and an outrageous plan to save the Earth from yet another alien invasion.

Adam Rex grew up in Phoenix, Arizona, the middle of three children. He discovered a talent for drawing as a child and pursued this interest through college. He got a BFA from the University of Arizona, where he met his physicist wife, Marie. Adam and Marie live in Tucson, where Adam draws, paints, writes, spends too much time on the Internet, and listens to public radio. His first novel, The True Meaning of Smekday, was the 2011 Odyssey Award Winner.

Bahni Turpin is an ensemble member of the Cornerstone Theater Company in Los Angeles. She has guest starred in many television series, including NYPD Blue, Law & Order, Six Feet Under, Cold Case, What About Brian, and The Comeback. Her film credits include Brokedown Palace, Crossroads, and Daughters of The Dust. Ms. Turpin won the Odyssey Award for The True Meaning of Smekday by Adam Rex. She has also received many AudioFile Earphones Awards for her unforgettable narration, including one for Precious by Sapphire, and for the National Book Award finalist and Oprah Book Club Pick The Underground Railroad by Colson Whitehead. She's also a member of the cast recording of The Help, which won numerous awards.
or
Not Currently Available for Direct Purchase
Copyright © 2020 American Booksellers Association