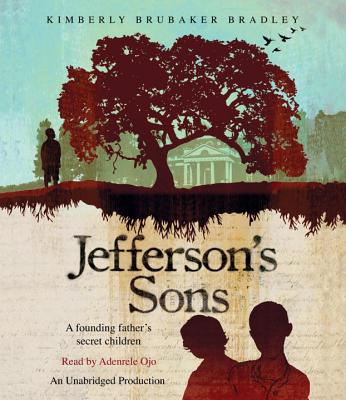 What does it mean when the man who wrote
the Declaration of Independence is your father
and also your slave master?

Beverly, Harriet, Madison, and Eston are Thomas Jefferson’s children, but their mother is a slave, so they must keep their father’s identity secret. They get special treatment—better work, better shoes, even violin lessons—but they are still slaves. Their father has promised to set them all free when each turns twenty-one. Some of them are light-skinned enough that they will be able to enter white society—and thereby turn their backs on home forever. Others won’t have that option. So just what did their father mean when he wrote all men are created equal?
Told in three parts from the points of view of three of Jefferson’s slaves—Beverly, Madison, and a third boy close to the Hemings family—these engaging and poignant voices shed light on what life was like as one of Thomas Jefferson’s invisible offspring.

* “A big, serious work of historical investigation and imagination; the tale has never before been told this well.” — Kirkus, starred review

* “[an] eye-opening and powerful novel.” — The Horn Book, starred review

* “Bradley’s sensitive and richly imagined vision pays respect to those who struggled for lives of stability and dignity, even as the whims and fortunes of the Jeffersons shifted beneath them.” — Bulletin of the Center for Childrens Books, starred review

“This well-researched and moving novel provides insight into their lives as it raises important and difficult questions.” — American Library Association

“The young innocents’ elemental questions raise fundamental issues for the reader. How could founding father Jefferson sell off Maddy’s best friend? What does it mean, ‘all people are created equal?’” — Booklist

Kimberly Brubaker Bradley is a Newbery Honor winner and a #1 New York Times bestselling author. She earned her degree from Smith College in 1989. She is popular for her fiction and nonfiction. Visit her at kimberlybrubakerbradley.com.

Adenrele Ojo is a native Philadelphian who was born in Brooklyn, New York, and currently resides in Los Angeles. First trained as a dancer as a little girl, she went on to study as a part of Philadanco’s Training Program; later she received her Bachelor of the Arts in theater from Hunter College in New York and honed her skills at the William Esper Studio, studying Meisner under the auspices of Maggie Flanigan.    Nominated for an L.A. Stage Alliance Ovation Award for Featured Actress in a Play for her role as Martha Pentecost in the Fountain Theater’s 2006 production of August Wilson’s Joe Turner’s Come and Gone, Adenrele Ojo, theatre brat (her dad, John E. Allen, Jr. was Founder & Artistic Director of Freedom Theatre, the oldest African American theater in Pennsylvania) is no stranger to the stage. In 2010 she performed in the Fountain Theatre’s production of The Ballad of Emmett Till by Ifa Bayeza, directed by Shirley Jo Finney, which won the 2010 L.A. Stage Alliance Ovation Award & the Los Angeles Drama Critics Award for Best Ensemble. Other plays include August Wilson’s Jitney and Freedom Theatre’s own Black Nativity (2007), where she played Mary.
Loading...
or
Not Currently Available for Direct Purchase