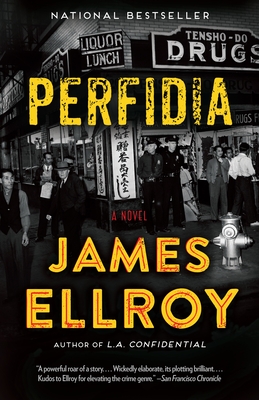 The hellish murder of a Japanese family summons three men and one woman. LAPD captain William H. Parker is superbly gifted, corrosively ambitious, liquored-up, and consumed by dubious ideology. He is bitterly at odds with Sergeant Dudley Smith—Irish émigré, ex-IRA killer, fledgling war profiteer. Hideo Ashida is a police chemist and the only Japanese on the L.A. cop payroll. Kay Lake is a twenty-one-year-old dilettante looking for adventure. The investigation throws them together and rips them apart. The crime becomes a political storm center that brilliantly illuminates these four driven souls—comrades, rivals, lovers, history’s pawns.

Here, Ellroy gives us the party at the edge of the abyss and the precipice of America’s ascendance. Perfidia is that moment, spellbindingly captured.

“A powerful roar of a story. . . . Wickedly elaborate, its plotting brilliant. . . . Kudos to Ellroy for elevating the crime genre.” —San Francisco Chronicle

“Pure, unadulterated Ellroy and a darkly compelling deconstruction of the recent American past. . . . Perfidia shows us the war on the home front as we have never seen it before.” —The Washington Post

“One of the great American writers of our time.” —Los Angeles Times

“A brilliant, breakneck ride. Nobody except James Ellroy could pull this off. He doesn’t merely write—he ignites and demolishes.”—Carl Hiaasen

“[Ellroy’s] style—jumpy, feverish, and anarchic—mirrors the world we enter. . . . [He] depicts with frightening authenticity how those innocent of crimes are knowingly framed in the interest of the almighty ‘greater good’.” —Dennis Lehane, The New York Times Book Review

“Ellroy has a way of giving gravitas to ugliness and making brutality beautiful. . . . To see him operating this way, full of power and totally in his comfort zone, is an awesome thing to behold.” —NPR/All Things Considered

“Grittier than Chandler, more operatic than Hammett, and more violent even than Cain. . . . Ellroy whittles [his characters’] thoughts and actions into sentences the way others do shivs—lean, brutalist, and intended to puncture, to penetrate.” —Interview magazine

“It is welcome news that Ellroy’s latest effort, Perfidia, returns home, sliding in as a prequel to the L.A. Quartet, set in the previous decade. . . . He is driven by a paradoxical obsession: to keep on digging up dark memories of the city, in the hope of rising above the psychic traumas of the past—not reborn, but newly wise.” —The Atlantic

“If Ellroy’s bitter visions entice you, Perfidia will take you once again to the underbelly of American history. . . . You will dive into Perfidia with a shiver that is equal parts anticipation and fear—because you know it’s going to get very dark very fast. . . . Ellroy’s singular style has been described as jazzlike or telegraphic; here it is insomniac, hallucinogenic, nightmarish.” —Tampa Bay Times

“There has never been a writer like James Ellroy. . . . He has been making real a secret world behind the official history of America . . . and to enter it is to experience a vivid eyeball rush of recognition.” —The Telegraph (London)

“Perfidia brings the two sides of his work together: the period crime-writing of LA Quartet, with its highlighting of police misdemeanors, and the wider politico-historical concerns of his subsequent Underworld USA trilogy.” —The Guardian (London), “Essential New Fiction”

“A war novel like no other. . . . There's no telling the good guys from the bad in Ellroy’s Los Angeles, because there are no good guys. . . . Ellroy is not only back in form—he’s raised the stakes.” —Kirkus Reviews (starred review)

“A return to the scene of Ellroy’s greatest success and a triumphant return to form. . . . His character portrayals have never been more nuanced or—dare we say it—sympathetic. . . . A disturbing, unforgettable, and inflammatory vision of how the men in charge respond to the threat of war. It’s an ugly picture, but just try looking away.” —Booklist (starred review)

James Ellroy was born in Los Angeles in 1948. He is the author of the L.A. Quartet: The Black Dahlia, The Big Nowhere, L.A. Confidential, and White Jazz, and the Underworld U.S.A. Trilogy: American Tabloid, The Cold Six Thousand, and Blood’s A Rover. These seven novels have won numerous honors and were international best sellers. Ellroy currently lives in Los Angeles.

www.jamesellroy.net
Loading...
or support indie stores by buying on