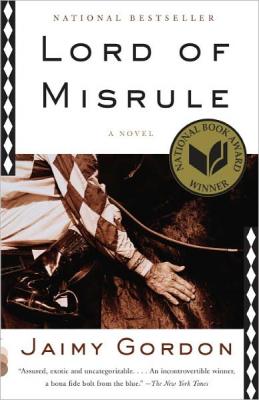 A brilliant novel that captures the dusty, dark, and beautiful world of small-time horse racing, where trainers, jockeys, grooms and grifters vie for what little luck is offered at a run-down West Virginia track.

Tommy Hansel has a plan: run four horses, all better than they look on paper, at long odds at Indian Mound Downs, then grab the purse -- or cash a bet -- and run before anyone’s the wiser. At his side is Maggie Koderer, who finds herself powerfully drawn to the gorgeous, used up animals of the cheap track. She also lands in the cross-hairs of leading trainer Joe Dale Bigg. But as news of Tommy’s plan spreads, from veteran groom Medicine Ed, to loan shark Two-Tie, to Kidstuff the blacksmith, it’s Maggie, not Tommy or the handlers of legendary stakes horse Lord of Misrule, who will find what's valuable in a world where everything has a price.

“A beautifully written novel…. Gordon has completely mastered the language of the racetrack.”—Jane Smiley, The Washington Post

“Lord of Misrule is filled with memorable characters who exist on the fringe, making up a whole world …. Gordon’s language is so textured that her pages seem three-dimensional.”  --Los Angeles Times

“I was mesmerized. . . . Lord of Misrule beautifully captures language of the racetrack”—Andrew Beyer, The Daily Racing Form

“Both richly literary and red-blooded in its depictions of the sporting life, Lord of Misrule gives readers several compelling races, including a completely unexpected but fitting finale.”—Milwaukee Journal-Sentinel

“An exuberant, jazzy novel about rough characters -- both equine and two-footed.”—The Plain Dealer

“[A] magical tale about a dusty West Virginia town and its downtrodden racetrack.”—NPR

“Unlike any novel you'll read this year—and maybe next.”—Philadelphia Inquirer

“A tour de force of energy and esprit.”—Kirkus, starred review

“Gordon’s writing will grab and pull you in.”—Bloomberg News

Jaimy Gordon's third novel, Bogeywoman was on the Los Angeles Times list of Best Books for 2000. Her second novel, She Drove Without Stopping, brought her an Academy-Institute Award for her fiction from the American Academy of Arts and Letters. Gordon's short story, "A Night's Work," which shares a number of characters with Lord of Misrule, appeared in Best American Short Stories 1995. She is also the author of a novella, Circumspections from an Equestrian Statue, and the fantasy classic novel Shamp of the City-Solo. Gordon teaches at Western Michigan University in Kalamazoo and in the Prague Summer Program for Writers.