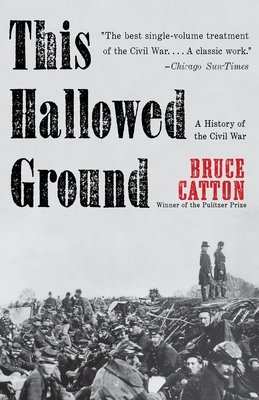 The classic one-volume history of the American Civil War simultaneously captures the dramatic scope and intimate experience of that epic struggle, by Pulitzer Prize-winner Bruce Catton.

Covering events from the prelude of the conflict to the death of Lincoln, Catton blends a gripping narrative with deep, yet unassuming, scholarship to bring the war alive on the page in an almost novelistic way. It is this gift for narrative that led contemporary critics to compare this book to War and Peace, and call it a “modern Iliad.” Now over fifty years old, This Hallowed Ground remains one of the best-loved and admired general Civil War books: a perfect introduction to readers beginning their exploration of the conflict, as well as a thrilling analysis and reimagining of its events for experienced students of the war.

Praise For This Hallowed Ground: A History of the Civil War (Vintage Civil War Library)…

“A classic work. . . . The best single-volume treatment of the Civil War. . . . A book to own and remember.”
—Chicago Sun-Times

“This book is to Civil War history what War and Peace is to fiction. . . . An outstanding reading experience.”
—Los Angeles Times

“Fresh and distinctive. . . . Reading it is sheer joy.”
—The New York Times

“Bruce Catton is doing the same job on the Civil War that Carl Sandburg did for Lincoln. . . . A magnificent account which reads like a modern Iliad.”
—The Miami Herald

“Catton writes as though he owned the War. It could not be in better hands.”
—The Little Rock Arkansas Gazette

“Racing, exciting narrative. . . . A great book that reflects the full measure of Catton’s rare combination of talent as a writer and historian.”
—The Kansas City Star

“The story of the Union in arms comes to life as in no other book on the war as a whole. . . . It is a as a narrative that this book achieves its distinction. From the opening chapter on to the final wonderful picture this story marches along, powerfully, breathlessly but with assurance. . . . A moving and exciting book.”
—Henry Steele Commager, New York Herald Tribune

Bruce Catton was born in Petoskey, Michigan, in 1899. A United States journalist and writer, Catton was one of America’s most popular Civil War historians. He worked as a newspaperman in Boston, Cleveland, and Washington, and also held a position at the U.S. Department of Commerce in 1948. Catton’s best-selling book, A Stillness at Appomattox, earned him a Pulitzer Prize and National Book Award in 1954. Before his death in 1978, Catton wrote a total of ten books detailing the Civil War.
Loading...
or support indie stores by buying on