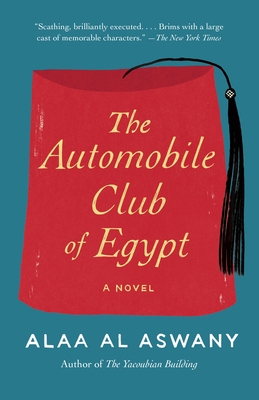 The Automobile Club of Egypt (Paperback)

In British-occupied Egypt, on the eve of the 1952 revolution, respected landowner Abd el-Aziz Gaafar has fallen on hard times. Bankrupt, he moves his family to Cairo and takes a menial job at the Automobile Club, a luxurious lodge for its European members, where Egyptians appear only as fearful servants. When Abd el-Aziz’s pride gets the better of him and he stands up for himself, he is subjected to a corporal punishment that ultimately kills him—leaving two of his sons obliged to work in the Club.

As the nation teeters on the brink of change, both servants and masters are subsumed by social upheaval, and the Egyptians of the Automobile Club face a choice: to live safely but without dignity as servants, or to risk everything and fight for their rights. Exuberant and powerfully moving, The Automobile Club of Egypt is an essential work of social criticism from one of the Arab world’s greatest literary voices.

Alaa Al Aswany is the author of The Yacoubian Building, which was long-listed for the International IMPAC Dublin Literary Award in 2006 and was the best-selling novel in the Arab world for more than five years; Chicago, named by Newsday as the best translated novel of 2006; The Automobile Club of Egypt; and the story collection Friendly Fire. He has received numerous awards internationally, including the Bashrahil Prize for the Arabic novel, the Kavafis Award from Greece and the Premio Grinzane Cavour from Italy. He was recently named by the London Times as one of the best fifty authors to have been translated into English over the last fifty years.

Praise For The Automobile Club of Egypt…

“Aswany is a master of suspense. . . . Every character in his novel is patiently described in exquisite detail.” —The Christian Science Monitor

“[Al Aswany’s novels] are national epics of the intimate: they remind their readers that every household hosts its own incarnations of fundamentalism, despotism, corruption, and graft.” —Harper’s

“It’s a masterpiece, the warmest and finest and most involving Egyptian novel in the last thirty years.” —Open Letters Monthly

“An important social satire and a harsh criticism of modern Egypt. . . . Al Aswany has once again delivered a remarkable and devastating portrait of a deeply unhappy society, in the guise of a novel that is at once funny, perceptive and affectionate.” —The Spectator