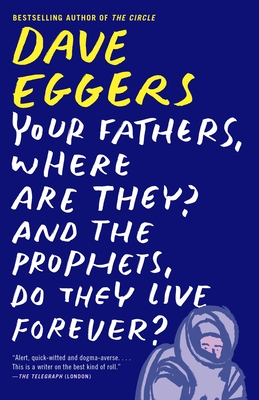 Your Fathers, Where Are They? And the Prophets, Do They Live Forever?

From Dave Eggers, best-selling author of The Circle, a tour de force of dialogue and dark humor, coursing emotions and tight control. Your Fathers, Where Are They? And the Prophets, Do They Live Forever?  is the formally daring, brilliantly executed story of one man struggling to make sense of his country, seeking solutions the only way he knows how.

What do you do when you’re full of questions: what happened to missions to the moon? Why spend a trillion dollars on war? Where did America go wrong? If you’re Thomas, a young man nursing migraines and a lack of direction, this calls for drastic action. To find some answers, Thomas kidnaps a NASA astronaut and brings him to an abandoned military base on the edge of the California coast. Then the questioning begins. The answers must be honest. The back and forth might even hurt. It might get uncomfortable. But eventually the truth will emerge.

Praise For Your Fathers, Where Are They? And the Prophets, Do They Live Forever?…

“Politically and polemically engaged in the tradition of Dickens and Zola . . . another novel located in a frightened, divided, deceitful and possibly disintegrating America . . . Your Fathers, Where Are They? And the Prophets, Do They Live Forever? is a hostage drama of sorts. It opens with Thomas, the disaffected protagonist, explaining to Kev Paciorek, a Nasa astronaut who just missed out on the space shuttle when funding was withdrawn, why he has been kidnapped and tied to a post in Building 52, an empty hangar in Fort Ord, an abandoned military base on the California coast . . . Many skilfully delayed revelations . . .  privately and publicly astute, confirming that the writer's joke about genius in his debut title was not entirely misplaced.” -- Mark Lawson, The Guardian

"Another startling leap into new territory . . . Here is a tale as tightly wound as an alarm clock. Told entirely in dialogue, it takes place on a deserted military base on the California coast. Thomas, its hero, has kidnapped an astronaut, Kev, and chained him to a post. . . Eggers has always been as elastic writer, but in Your Fathers he puts his language to the ultimate test. Thomas’ tone yaws from sincerity to creepy insinuation, capturing the abrupt shifts and feedback loops of delirium. Happily, however, Eggers never pushes his young hero over the edge. Thomas has done something at best ill-advised, at worse criminal. Thomas merely wants what we all want; an accounting. In this gripping and saddening book, Eggers has shown what happens when young men like him don’t get answers." -- John Freeman, Toronto Star

“Joan Didion began her career chronicling a certain ennui afflicting Californians coming up in the Vietnam era who were quickly losing faith in the society their parents created . . . The sense of a similar void animates Dave Eggers' new novel, Your Fathers, Where Are They? And the Prophets, Do They Live Forever? . . . Eggers has a knack for potent images of frustration . . . So soon after Elliot Rodger's California massacre, Eggers has produced something timely. There is a book to be written about angry young white men turning against a society that isn't giving them what they think they're owed.” -- Sam Worley, Chicago Tribune

"The third instalment in what now seems a triptych about people slipping through the cracks of our contemporary aspirations . . . a peculiar hostage drama told entirely in dialogue, looks like farce on the surface, but a sharp set of teeth soon shows through . . . alert, quick-witted and dogma-averse . . . [Eggers] works hard to surprise, challenge and confound . . . A book whose themes resonate far beyond its short length. This is a writer on the best kind of roll." -- Tim Martin, The Telegraph

"Fathers is a screaming, bleating cry for society to fix itself. It is a frothing, angry, mournful meditation on what is slipping away as America plows on into the 21st century….Eggers' decision to make Fathers a continuous dialogue is an interesting one. It intensifies the already manic qualities of his protagonist, Thomas, and makes for a lightning-quick read . . . compelling and at times suspenseful.” -- Henry C. Jackson, Chicago Daily Herald

“Hard not to be affected by his charm and literary DIY . . . We begin with Thomas, a confused young man who has drugged and kidnapped a NASA astronaut named Kev. Thomas is a mixed-up psychopath and arsonist who previously has attempted to burn down a hospital after his mentally disturbed best friend, Don Banh, was killed in a police shooting. . . Working in the tradition of Manuel Puig’s Kiss of the Spiderwoman and Nicholson Baker’s Vox, the novel is without description or speaker attribution. . . Ambitious.” -- Alex Gilvarry, The Boston Globe

"Dave Eggers' latest novel is short and snappy. Composed entirely of dialogue, it breezes through four days in the life of Thomas, a disillusioned sociopath who has finally decided to get some answers to the questions that are strangling him at night . . . Eggers has created an appropriately Sophoclean space to look at Thomas' burning questions: Why does society prepare you for a life that doesn't exist? Why is there no grand, universal struggle? Why is there no purpose in life outside of individual needs? These concerns dance so gracefully into the discussions that you barely notice you're sparring with the existential heavyweights until one of them knocks you out . . . This short, provocative novel feels a bit like Jack Bauer stepping into Kierkegaard's collected works. Lively and fast enough for the casual reader, it also ambitiously confronts a grand history of philosophical angst. While the book's literary kin might be Dostoevsky or Kafka, its kissing cousin is Walker Percy . . . Swift and smart." -- Zoë Ferraris, San Francisco Gate

"Unmistakably the work of a singular talent . . . with each tightly controlled book, Eggers' fiction becomes more prescient, moving and unsettling . . . Eggers again finds the perfect form for his subject-matter . . . The novel thrives on ambiguity . . . Eggers examines the cataclysms that occur when our lives veer from the narratives that we construct for them. He's interested in the "throwaway people" who don't meet society's expectations. . . Even if all generations are lost generations, we need engaged, incendiary novels which ask: What now?" -- Max Liu, The Independent

"Dave Eggers never writes the same book twice, and his latest may be his most unusual to date . . . [A] fleet and forceful story by one of our finest fiction writers . . . The author makes his points in stark exchanges, with little exposition, and the book's spare style propels the reader to the end. Thomas isn't a likeable character, but he's an oddly sympathetic one -- or, at least, one who is easy to recognize.” -- Georgia Rowe, San Jose Mercury News

"So deft . . . the setting and mood are perfectly clear - the remoteness of the dilapidated base, the roaring sea nearby, the danger facing his victims . . . Compelling, rattling along so lightly it would be a jeu d'esprit but for its sobering subject. Eggers writes so well you would read a computer manual if it was by him, but beneath his beguiling style is a base note of genuine concern about those who find themselves out of kilter with society . . . Intriguing . . . Eggers shows the tripwire that lies between acknowledging the world is unfair, and finding targets on whom to pin the blame when - perhaps the cruellest truth of all - the finger can rarely be pointed in any meaningful direction." -- Rosemary Goring, The Herald Scotland

“Engaging . . . You have to go back to Steinbeck and Vonnegut to find a popular American novelist so willing to deploy his talents to such deliberately political ends. . . . A moral fiction that’s as flexible and subtle as any other kind. . . . The dialogue-only structure and depth of feeling in Your Fathers are to its credit. You know what Eggers wants to say, he says it quickly, and he says it with a respectably righteous fury. And, ultimately, he says it with a compassion that’s always been present in his work. . . . Fascinating.” -- Mark Athitakis, The Washington Post

"[A] story about someone who takes revenge against the world because he can't fathom how he fits into it. . . This is a one-sitting read . . . Insightful." -- USA Today

“A jazz session—a brief, single helping of strangeness that flaunts his panache for stylistic experimentation. . . The writing is compelling and the characterization astute.” -- Booklist

“Have questions for an astronaut and can’t get him to answer your letters? You can always kidnap him, drag him to an abandoned military base near Monterey Bay, chain him to a post and threaten another jolt from your friendly Taser if he doesn’t cooperate. At least that’s the approach taken by 34-year-old Thomas in Dave Eggers’ new novel . . . As is always true with Eggers, those ideas—laid out here in quasi-Socratic dialogue—are inherently interesting. I can think of few contemporary American writers who convey such a sense of urgency about the mess we're in—or how important it is that we, like the Israelites surrounding Zechariah, resurrect the once-glorious Temple.  Eggers pulls no punches. . . Eggers makes these points even as he simultaneously manages empathy for Thomas’ plight, as a man who has inherited a fallen world he never made.” -- Mike Fischer, Milwaukee Journal Sentinel

"The faint echo of Plato's dialogues . . . Raising questions about the appropriate relationship between authority and compassion." -- Kirkus

"Within 212 pages, Eggers displays a delicate, haunting, sometimes dire picture of the world. It may not be a comfortable read, but it's an interesting take on what we believe to be true and what we hope to be true." -- Mark Lopez, Alibi.com

Dave Eggers is the author of nine books, including most recently The Circle and A Hologram for the King, which was a finalist for the 2012 National Book Award. He is the founder of McSweeney's, an independent publishing company based in San Francisco that produces books, a quarterly journal of new writing (McSweeney's Quarterly Concern), and a monthly magazine (The Believer). McSweeney's also publishes Voice of Witness, a nonprofit book series that uses oral history to illuminate human rights crises around the world. Eggers is the cofounder of 826 National, a network of eight tutoring centers around the country, and ScholarMatch, a nonprofit organization designed to connect students with resources, schools, and donors to make college possible. He lives in Northern California with his family.
Loading...
or
Not Currently Available for Direct Purchase