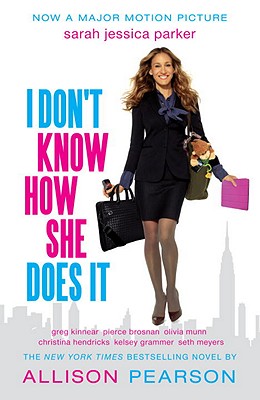 I Don't Know How She Does It (Movie Tie-In Edition)


“The book every working woman is likely to devour. . . . A hysterical look—in both the laughing and crying senses of the word—at the life of Supermom.” —The New York Times


“Perfectly captures the driven days and frequently sleep-deprived nights of that modern mammal, the working mother . . . with acute humor, piercing insight and more than a touch of tenderness.” —New York Daily News

Allison Pearson, an award-winning journalist and author, is a staff writer for the London "Daily Telegraph. "Her first novel, "I""Don't Know""How She Does It, "became an international bestseller and was translated into thirty-two languages. She is a patron of Camfed, a charity that supports the education of thousands of African girls. Pearson lives in Cambridge with her husband and their two children.
Loading...
or support indie stores by buying on
(This book is on backorder)