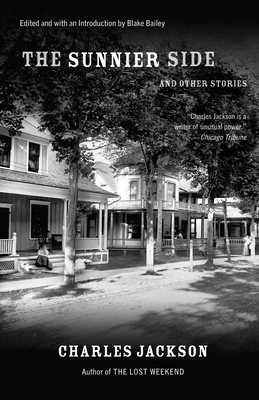 The Sunnier Side and Other Stories

A masterful collection of short stories exposing the seamy undercurrents of small-town American life from Charles Jackson, celebrated author of The Lost Weekend.

The Sunnier Side showcases Jackson at the height of his storytelling powers, reaffirming his reputation as a boundary-pushing, irreverent writer years ahead of his time.

Praise For The Sunnier Side and Other Stories…

“Charles Jackson is a writer of unusual power.”
—Chicago Tribune

“In their compassionate but merciless self-examination, their almost unbearable integrity, their penetrating (unarty) artfulness, [Jackson's stories] force the reader back upon himself, make him reflect upon his own motivations, his own worth.”
—The New York Times Book Review

“Jackson is a writer of lasting inventiveness and power.”
—Saturday Review

“It is not possible to squeeze Mr. Jackson's technique into any one school. First and foremost he is a creator of his own world. In his best stories he catches the tune of all our existence and hums it for us with the casual colloquially relaxed precision characteristic of his style.”
—New York Herald Tribune Book Review

Charles Jackson was born in 1903 and raised in the township of Arcadia, New York, in the Finger Lakes region, where much of his fiction is set. After a youth marred by tuberculosis and alcoholism, Jackson achieved international fame with his first novel, The Lost Weekend (1944), which was adapted into a classic movie by Billy Wilder and Charles Brackett. Over the next nine years, Jackson published two more novels and two story collections, while continuing to struggle with alcohol and drug addiction. In 1967, after a fourteen-year silence, he returned to the best-seller lists with a novel about a nymphomaniac, A Second-Hand Life, but the following year he died of an overdose at the Hotel Chelsea in Manhattan.

Blake Bailey is the author of Farther & Wilder: The Lost Weekends and Literary Dreams of Charles Jackson. His other books include A Tragic Honesty: The Life and Work of Richard Yates, finalist for the National Book Critics Circle Award, and Cheever: A Life, winner of the National Book Critics Circle Award, the Francis Parkman Prize, and finalist for the Pulitzer and James Tait Black Memorial Prize. He edited a two-volume edition of Cheever’s work for The Library of America, and in 2010 received an Award in Literature from the American Academy of Arts and Letters. He lives in Virginia with his wife and daughter.
Loading...
or
Not Currently Available for Direct Purchase