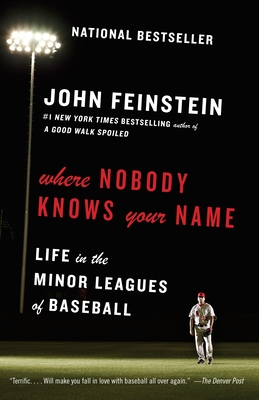 Where Nobody Knows Your Name (Paperback)

Life in the Minor Leagues of Baseball (Anchor Sports)

Minor league baseball is quintessentially American: small towns, small stadiums, $5 tickets, $2 hot dogs, the never-ending possibility of making it big. But looming above it all is always the real deal: Major League Baseball. John Feinstein takes the reader behind the curtain into the guarded world of the minor leagues, like no other writer can. Where Nobody Knows Your Name explores the trials and travails of the inhabitants of Triple-A, focusing on nine men, including players, managers and umpires, among many colorful characters, living on the cusp of the dream. The book tells the stories of former World Series hero Scott Podsednik, giving it one more shot; Durham Bulls manager Charlie Montoya, shepherding generations across the line; and designated hitter Jon Lindsey, a lifelong minor leaguer, waiting for his day to come. From Raleigh to Pawtucket, from Lehigh Valley to Indianapolis and beyond, this is an intimate and exciting look at life in the minor leagues, where you’re either waiting for the call or just passing through.

JOHN FEINSTEIN is the #1 New York Times bestselling author of the classics sports books A Season on the Brink and A Good Walk Spoiled, along with many other bestsellers. His first YA mystery, Last Shot, won The Edgar Allen Poe Award for mystery writing. He is a member of Naismith Basketball Hall of Fame and The National Sportswriters and Sportscasters Hall of Fame. He is also a columnist for The Washington Post, Golf World, and Golf Digest. He is a contributor to the Golf Channel, and is an essayist for CBS Sports Television.


Praise For Where Nobody Knows Your Name: Life in the Minor Leagues of Baseball (Anchor Sports)…

“[T]errific…[R]eading this book will make you fall in love with baseball all over again.”—The Denver Post

“One of the best sportswriters alive.”—USA Today

“Feinstein’s work, like that of the best American sportswriters, is richly detailed and emotionally articulate...Feinstein's storytelling is compelling, his understanding of the structural cruelties and emotional consequences of winner-takes-all competition acute.”—The Guardian (UK)

“Feinstein takes readers down the dusty roads of minor league baseball with a vivid look at the players dreaming of a shot at the big leagues.”
—Parade

“John Feinstein, one of our best-known sportswriters, explores…baseball’s International League, one of the two AAA leagues, just below the majors….With many of us counting down to opening day, this is a fitting time for a book whose subtitle might well be ‘hope springs eternal — every spring.’”
—The Washington Post

“[P]oignant … [2013] marked the 25th anniversary of ‘Bull Durham,’ and I’m pretty sure a lot of people still think that's how things go in the minors. Mr. Feinstein clears the perspective on the realities of minor-league life so that the reader can move on from Nuke LaLoosh imagery. And for the average baseball fan, this is no minor accomplishment.”
—The Wall Street Journal
or
Buy Here
Copyright © 2020 American Booksellers Association