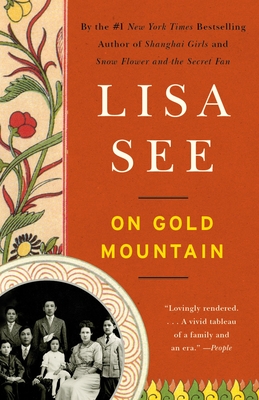 The One-Hundred-Year Odyssey of My Chinese-American Family

In 1867, Lisa See's great-great-grandfather arrived in America, where he prescribed herbal remedies to immigrant laborers who were treated little better than slaves. His son Fong See later built a mercantile empire and married a Caucasian woman, in spite of laws prohibiting interracial marriage. Lisa herself grew up playing in her family's antiques store in Los Angeles's Chinatown, listening to stories of missionaries and prostitutes, movie stars and Chinese baseball teams.
With these stories and her own years of research, Lisa See chronicles the one-hundred-year-odyssey of her Chinese-American family, a history that encompasses racism, romance, secret marriages, entrepreneurial genius, and much more, as two distinctly different cultures meet in a new world.


Praise For On Gold Mountain: The One-Hundred-Year Odyssey of My Chinese-American Family…

"Terrific stuff. . . . The See family's adventures would be incredible if On Gold Mountain were fiction." --The New York Times Book Review

Lisa See is the New York Times bestselling author of Shanghai Girls, Peony in Love, Snow Flower and the Secret Fan, Flower Net (an Edgar Award nominee), The Interior and Dragon Bones. She wrote the libretto for the Los Angeles Opera adaptation of On Gold Mountain and served as curator for the Autry Museum of Western Heritage’s exhibit On Gold Mountain: A Chinese American Experience, also featured at the Smithsonian Institute. The Organization of Chinese American Women named her the 2001 National Woman of the Year. She lives in Los Angeles.
Loading...
or support indie stores by buying on