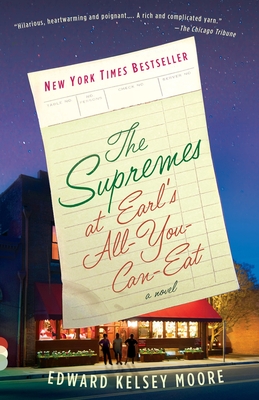 This diner in Plainview, Indiana is home away from home for Odette, Clarice, and Barbara Jean. Dubbed "The Supremes" by high school pals in the tumultuous 1960s, they’ve weathered life’s storms for over four decades and counseled one another through marriage and children, happiness and the blues.

Now, however, they’re about to face their most challenging year yet. Proud, talented Clarice is struggling to keep up appearances as she deals with her husband’s humiliating infidelities; beautiful Barbara Jean is rocked by the tragic reverberations of a youthful love affair; and fearless Odette is about to embark on the most terrifying battle of her life.

“Hilarious, heartwarming and poignant. . . . A rich and complicated yarn.” —The Chicago Tribune

“Moore shows a seasoned ease with his funny, damaged subjects. . . . You’ll be casting the movie by the second chapter.” —Entertainment Weekly

“Moore has conjured up the story of an entire community and, at its sparkling center, a trio of memorable heroines.” —Julia Glass, author of Three Junes

“Comparisons to The Help and Fried Green Tomatoes at the Whistle Stop Cafe are inevitable, but Moore’s take on this rowdy troupe of outspoken, lovable women has its own distinctive pluck.” —Publishers Weekly

“Funny and tenderhearted. . . . The most remarkable quality of The Supremes is love—the author’s love for his characters, even the most flawed, shines from every page.” —Shelf Awareness

“Edward Kelsey Moore has written a novel jam-packed with warmth, honesty, wit, travail, and just enough madcap humor to keep us giddily off-balance. . . . The Supremes at Earl’s All-You-Can-Eat is that rare and happy find: a book that delivers not only good story, but good company.” —Leah Hager Cohen, author of The Grief of Others

“A gripping novel that weaves together the lives of three remarkable women, and does so with flair, wit, and tremendous heart.” —Carolina De Robertis, author of Perla

“The author uses warmhearted humor and salty language to bring to life a tight-knit African-American community. . . . [Has] salt-of-the-earth characters like fearless Odette, motherless Barbara Jean, and sharp-tongued Clarice, along with an event-filled plot that readers will laugh and cry over.” —Library Journal

“I am always a little suspicious of a male writer speaking for female characters, but Moore inhabits and enlarges the experience he creates so delightfully. A real triumph for a brilliant new novelist.” —Suzanne Levine, author of How We Love Now: Women Talk About Intimacy after Fifty

“Edward Kelsey Moore’s The Supremes at Earl’s All-You-Can-Eat had me nodding in recognition and laughing out loud when I wasn’t crying. His delightful voice really rings true, bringing the unforgettable Odette, Clarice and Barbara Jean to vivid life on every page.—Connie Briscoe, author of Money Can’t Buy Me Love

“The Supremes at Earl’s-All-You-Can-Eat is a scrumptious delight! I can’t wait for my old friends to get to know my new friends: Odette, Barbara Jean, and Clarice (not to mention Odette’s pot-smoking mama and her friend Mrs. Roosevelt!).” —Carleen Brice, author of Orange Mint and Honey and Children of the Waters

Edward Kelsey Moore lives in Chicago, where he has enjoyed a long career as a cellist. His short fiction has appeared in several literary magazines, including Indiana Review, African American Review, and Inkwell. His short story “Grandma and the Elusive Fifth Crucifix” was selected as an audience favorite on National Public Radio’s Stories on Stage series.

“The Supremes at Earl’s All-You-Can-Eat is rooted in the fond memories I have of a childhood spent eavesdropping on the women of my family as they talked at family gatherings. Even when I was too young to fully understand the often very adult subject matter of their conversations, I was struck by how quickly the topics veered from heartbreakingly tragic to wildly hilarious. . . . My intention in writing The Supremes at Earl’s All-You-Can-Eat was to celebrate the joy of true friendship and to invite readers to remember the smart, funny and strong women in their lives.” —Edward Kelsey Moore

Do you think the author has accomplished what he set out to do? Does he, a man, convey the feelings of women accurately and convincingly? In what ways is he especially knowing about women’s feelings?

Odette was born in a sycamore tree. Barbara Jean was born on the wrong side of the tracks. Clarice was the first black baby to be born in an all-white hospital. How do the circumstances of each woman’s birth shape her choices as adult? Their interactions with one another? Their relationships with their husbands?

When things get tough for the Supremes, they often see the funny side of the worst moments. Moore has a lot of fun with cousin Veronica and her donut-eating daughter. In what other instances do the Supremes use humor to help them survive?

Odette, Clarice, and Barbara Jean are best friends, but they’re quite different. What is a defining moment in each of their lives?

Commenting on “the tender considerations that came with being a member of the Supremes,” Odette says: “We overlooked each other’s flaws and treated each other well, even when we didn’t deserve it” (p. 37). What other qualities make the friendship among the three women so extraordinary? In what ways do they help one another?

The chapters alternate between Odette’s voice and an omniscient third-person narrator. What is the effect of this in storytelling? Why does Moore choose Odette as a narrator rather than Clarice or Barbara Jean?

Ghosts appear throughout the novel. What does Odette’s mother’s voice add to the story? What kind of personality comes through? In what ways does she represent a voice of wisdom, and can this be helpful or aggravating to Odette?

One of Dora Jackson’s beliefs is that “what we call miracles is just what’s supposed to happen. We either go with it or stand in its way” (p.296). What seemingly miraculous events occur in the novel, and why do some characters choose to “go with it” and others “stand in [their] way”?

Earl’s All-You-Can-Eat is the first black-owned restaurant in Plainview, Indiana. What role does place play in the novel, and how does the diner shape the lives of the main characters?

The Supremes grew up in tumultuous times. How was each one of them affected by the major social changes for African Americans, as well as for women, that occurred over the course of their lives?

How are the men who love the Supremes—James, Richmond, Lester, and Chick—each a reflection of the woman he loves? And what does each husband give to the woman in his life that she treasures, despite his failings?

Why does Clarice decide not to move back in with Richmond, even after he feels they’ve patched things up? What other changes do you see in Clarice after her separation from her husband, specifically in her relationship with music and religion? Do you think she will follow her dream as a musician?

Do you think that after a life of hard knocks, Barbara Jean will finally find happiness with Chick? Or is she destined for more tough times ahead?

Whether alive or dead (or a ghost), the mothers of the Supremes play a major role in their daughters’ lives. As the Supremes grow older, how do their mothers continue to exert an influence on their adult lives? Who is hurt most by it? Who is helped by it? Who is most like her mother as she gets older?

Odette, Clarice, and Barbara Jean each attend three very different churches. In what ways did growing up in these particular churches help to shape them into women they ultimately became?