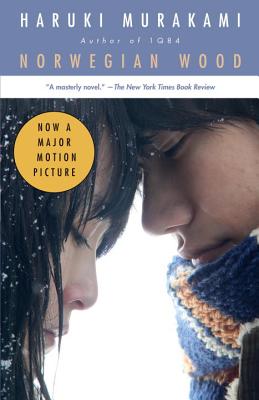 A special movie-tie in edition for the long-awaited film release based on this beloved novel by Haruki Murakami: the story of one college student's romantic coming-of-age, a journey to that distant place of a young man's first, hopeless, and heroic love.

Toru, a quiet and preternaturally serious young college student in Tokyo, is devoted to Naoko, a beautiful and introspective young woman, but their mutual passion is marked by the tragic death of their best friend years before.  Toru begins to adapt to campus life and the loneliness and isolation he faces there, but Naoko finds the pressures and responsibilities of life unbearable.  As she retreats further into her own world, Toru finds himself reaching out to others and drawn to a fiercely independent and sexually liberated young woman.

“Norwegian Wood not only points to but manifests the author’s genius.”
—Chicago Tribune

“A treat. . . . Murakami captures the heartbeat of his generation and draws the reader in so completely you mourn when the story is done.”
—The Baltimore Sun

Haruki Murakami was born in Kyoto in 1949 and now lives near Tokyo. His work has been translated into more than fifty languages, and the most recent of his many honors is the Yomiuri Literary Prize, whose previous recipients include Yukio Mishima, Kenzaburo Oe, and Kobo Abe.
Loading...
or
Not Currently Available for Direct Purchase