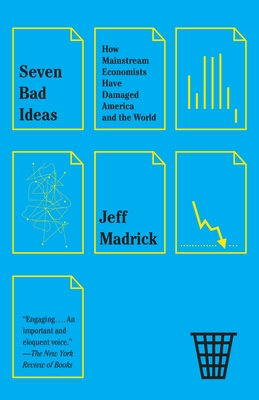 How Mainstream Economists Have Damaged America and the World

From the former economics columnist for Harper’s and The New York Times, a bold indictment of some of our most accepted mainstream economic theories—why they’re wrong, and how they’ve been harming America and the world.

Ideas have the power to change history. But what happens when they are bad? In a tour de force of economics, history, and analysis, Jeff Madrick shows how theories on austerity, inflation, and efficient markets have become unassailable mantras over recent years, to the detriment of the country as a whole. Working backwards from the Great Recession, Madrick pulls no punches as he reconsiders seven of the greatest false idols of modern economic theory, from Say’s Law to Milton Friedman, illustrating how these ideas have been damaging markets, infrastructure, and individual livelihoods for years. Trenchant, sweeping, and empirical, Seven Bad Ideas resoundingly disrupts the status quo of modern economic theory.


Praise For Seven Bad Ideas: How Mainstream Economists Have Damaged America and the World…

“Engaging. . . . An important and eloquent voice.” —The New York Review of Books

“If there were an eighth bad idea, it would be ignoring this book.” —Shelf Awareness

“Must-read. . . . Brisk and accessible. . . . Madrick outlines the wrong-headed propositions, fictitious models, shoddy research, and partisan agendas that have made a reexamination of the entire field long overdue.” —Salon

“Jeff Madrick argues that the professional failures since 2008 didn’t come out of the blue but were rooted in decades of intellectual malfeasance. . . . Madrick has clarified my own thinking on the subject. . . . [These] bad ideas are definitely out there, have been expressed by plenty of economists, and have indeed done a lot of harm. . . . Important.” —Paul Krugman, The New York Times

“‘Zombie ideas,’ it’s been said, are those that should have been killed by evidence, but refuse to die. Even more obdurate are the axioms of orthodox economics, upon which pernicious policies are erected. Mythbuster Madrick, in clear and compelling prose, demolishes seven of the biggest of these. May they (hopefully) rest in peace.” —Mike Wallace, Pulitzer Prize-winning historian and coauthor of Gotham

“Fascinating and provocative. . . . Madrick makes a strong, persuasively argued case, offering a refreshing take on the political and fiscal policies that have defined our era, and the questionable foundations on which they uncomfortably rest.” —PopMatters.com

“Influenced on the one side by broad, somewhat ideological belief in the efficacy of markets, and on the other side by strong belief in the value of what can be learned by building and analyzing simple formal models, in recent years the economics discipline has lost much of its ability and interest in studying pragmatically and empirically how the economy actually operates. Madrick’s Seven Bad Ideas is one of the best discussions of this problem that I have seen.” —Richard Nelson, professor emeritus, Columbia University

“In his incisive new book Jeff Madrick shows in rigorous and compelling detail how mainstream economic theory not only failed to anticipate the financial crisis of 2008 and the recession that followed, but actively contributed to the worst economic calamity since the Great Depression. If you suspect there is something radically wrong with mainstream economic theory, you must read Seven Bad Ideas.” —John Gray, professor emeritus, London School of Economics

“In the venerable Mark Twain tradition, Jeff Madrick explains that what makes some economists so dangerous isn’t what they don’t know, it’s what they know that just ain’t so.” —Robert H. Frank, author of The Economic Naturalist

Jeff Madrick, a former economics columnist for Harper’s and The New York Times, is a regular contributor to The New York Review of Books and the editor of Challenge magazine. He is visiting professor of humanities at The Cooper Union and director of the Bernard L. Schwartz Rediscovering Government Initiative at the Century Foundation. His books include Age of Greed, The End of Affluence, and Taking America. He has also written for The Washington Post, the Los Angeles Times, Institutional Investor, The Nation, The American Prospect, The Boston Globe, and Newsday. He lives in New York City.

@JeffMadrick
Loading...
or
Not Currently Available for Direct Purchase