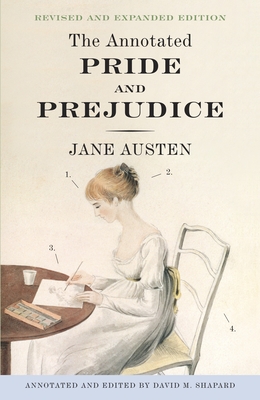 The Annotated Pride and Prejudice

A Revised and Expanded Edition

This Revised and Expanded Edition contains hundreds of new notes and illustrations.

The first-ever fully annotated edition of one of the most beloved novels in the world is a sheer delight for Jane Austen fans. Here is the complete text of Pride and Prejudice with thousands of annotations on facing pages, including:

• Citations from Austen’s life, letters, and other writings

Parallels between the novel and Austen’s experience are revealed, along with writings that illuminate her beliefs and opinions.

Archaic words, words still in use whose meanings have changed, and obscure passages are explained.

Insightful notes highlight Austen’s artistry and point out the subtle ways she develops her characters and themes.

of places and objects mentioned in the novel.

• An introduction, a bibliography, and a detailed chronology of events

Of course, one can enjoy the novel without knowing the precise definition of a gentleman, or what it signifies that a character drives a coach rather than a hack chaise, or the rules governing social interaction at a ball, but readers of The Annotated Pride and Prejudice will find that these kinds of details add immeasurably to understanding and enjoying the intricate psychological interplay of Austen’s immortal characters.

Jane Austen (1775–1817) was born in Hampshire, England, where she spent most of her life. Though she received little recognition in her lifetime, she came to be regarded as one of the great masters of the English novel.