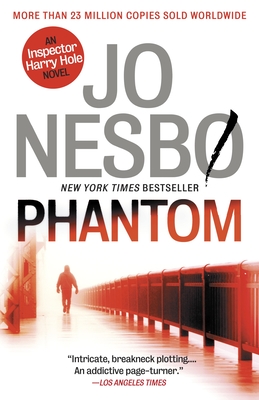 When Harry Hole moved to Hong Kong, he thought he was escaping the traumas of his life in Oslo and his career as a detective for good. But now, the unthinkable has happened—Oleg, the boy he helped raise, has been arrested for killing a man. Harry can't believe that Oleg is a murderer, so he returns to hunt down the real killer.

Although he's off the police force, he still has a case to solve that will send him into the depths of the city’s drug culture, where a shockingly deadly new street drug is gaining popularity. This most personal of investigations will force Harry to confront his past and the wrenching truth about Oleg and himself.

“A cunningly constructed thriller with a lot of moving parts, and once [Nesbø] sets the machinery in motion, the pace accelerates. . . . at Hollywood summer blockbuster speed.” —Richmond Times-Dispatch

“Whether you are already a fan of Harry Hole, or just getting to know him, the gripping suspense and fast-paced action that fills Phantom will keep you reading until dawn.” —Oprah.com

“Chilling. . . . Nesbø’s most realistic and most affecting [novel].”  —The Columbus Dispatch

“Far more than a procedural. . . . Personal and topical and hip, as usual. . . . Nesbø sets an emotionally wrenching story about family within a twisty tale of designer drugs, Norwegian police corruption, and a teenage underworld.” —Pittsburgh Post-Gazette

“The most realistic novel in this series . . . it may also be the darkest. . . . Although the novel’s villains can’t hold a candle to Nesbø’s typical psychos, they’re much closer to the ones you might meet in the real world.” —The New York Times Book Review

“While Hole is indisputably the dominant force, Phantom features a second character that adds a surprising depth to the novel—and that is Oslo itself.” —The Boston Globe

“Harry Hole is fast becoming one of the planet’s favorite detectives. And his demons are almost as legendary as his observational and analytical skills. [This is] Harry’s most lethally gripping and personal journey to date.” —The Mirror (UK)

“Phantom will maintain Jo Nesbø’s unstoppable momentum. . . . His recovering-alcoholic, shambolic, rule-breaking detective is somehow always surprising us . . . The relationship between Harry and Rakel is truly multifaceted, and richer in nuance than anything else in the crime genre.” —The Independent (UK)

“Deeply moving . . . This is Harry’s most personal case, and yet Nesbø never allows Harry’s paternal feelings for Oleg to cloud his need for truth, however costly that pursuit may be.” —Publishers Weekly (starred)

“Nesbø begins with an emotionally gripping family drama but surrounds it with an elaborate, beautifully constructed plot. . . . Finally, it all comes back to Harry and the pain he endures in trying to carve out a separate peace from a world and a past that won’t let him go. Superb on every level.” —Booklist (starred)

“Those hooked by [The Snowman] or earlier ones should make their way here as quickly as they can . . . This one best takes the full measure of the man . . . Devastating for protagonist and reader alike.” —Kirkus Reviews (starred)

Jo Nesbø’s books have sold more than eighteen million copies worldwide, and have been translated into forty-seven languages. His previous Harry Hole novels include The Redbreast, Nemesis, The Devil’s Star, The Snowman, and The Leopard, and he is the author of Headhunters and several children’s books. He has received the Glass Key Award for best Nordic crime novel. He is also a musician, songwriter, and economist and lives in Oslo.