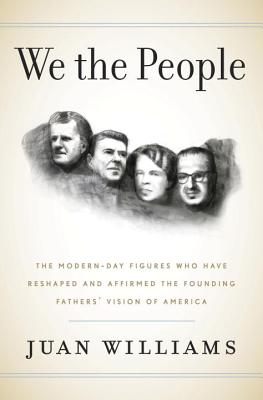 We the People (Hardcover)

What would the Founding Fathers think about America today? Over 200 years ago the Founders broke away from the tyranny of the British Empire to build a nation based on the principles of freedom, equal rights, and opportunity for all men. But life in the United States today is vastly different from anything the original Founders could have imagined in the late 1700s. The notion of an African-American president of the United States, or a woman such as Condoleezza Rice or Hillary Clinton as Secretary of State, would have been unimaginable to the men who wrote the Declaration of Independence and the Constitution, or who ratified the Constitution or the Bill of Rights.

In a fascinating work of history told through a series of in depth profiles, prize-winning journalist, bestselling author, and Fox political analyst Juan Williams takes readers into the life and work of a new generation of American Founders, who honor the original Founders’ vision, even as they have quietly led revolutions in American politics, immigration, economics, sexual behavior, and reshaped the landscape of the nation.

Among the modern-day pioneers Williams writes about in this compelling new book are the passionate conservative President Reagan; the determined fighters for equal rights, Thurgood Marshall and Martin Luther King, Jr.; the profound imprint of Rev. Billy Graham’s evangelism on national politics; the focus on global human rights advocated by First Lady Eleanor Roosevelt; the leaders of the gay community who refused to back down during the Stonewall Riots and brought gay life into America’s public square; the re-imagined role of women in contemporary life as shaped by Betty Friedan.

Williams reveals how each of these modern-day founders has extended the Founding Fathers original vision and changed fundamental aspects of our country, from immigration, to the role of American labor in the economy, from modern police strategies, to the importance of religion in our political discourse.

America in the 21st Century remains rooted in the Great American experiment in democracy that began in 1776. For all the changes our economy and our cultural and demographic make-up, there remains a straight line from the first Founders’ original vision, to the principles and ideals of today’s courageous modern day pioneers.

Juan Williams is a top political analyst for Fox News Channel, co-host of the daily news show “The Five,” and a columnist for The Hill. Previously, he worked for two decades at The Washington Post as White House correspondent and a prize-winning columnist. He has won an Emmy for TV documentary writing. For ten years, he was a daily talk show host and senior political correspondent for NPR. His written work includes such critically acclaimed, bestselling books as Eyes on the Prize, Enough, and Thurgood Marshall.

Praise For We the People: The Modern-Day Figures Who Have Reshaped and Affirmed the Founding Fathers' Vision of America…

Advance Praise for We the People

"American democracy is continually being reborn, and Juan Williams brings alive the impact of some of the modern-day leaders of this renewal. By portraying people of different backgrounds and ideologies, he has created a series of narratives that are both inspiring and thought provoking."
-- Walter Isaacson

“In a Washington boiling with anger, some of it real and some of it synthetic, Juan Williams is a rarity. He combines strong beliefs with a cheerful ability to see how disparate people, including some with whom he disagrees, have enriched the American mosaic. From Robert Moses to Robert Ball, and from George Meany to Charlton Heston, this book will remind readers of some strong men and women who made the nation strong.”
--George F. Will

"The Founders of our nation, politically bold and intellectually adventurous, would be appalled at the idea that their revolutionary work would be used as a trump card against change, creative thinking, or social progress. The genius of Juan Williams' We the People is that it shows how subsequent generations kept the promise of those who created our republic by building on their work rather than sitting back complacently, advancing the rights of excluded groups, and facing new problems squarely. Williams' moving portraits of key figures in our national story show why the American gift for self-criticism and self-correction will always be one of our greatest assets."
-- E. J. Dionne Jr., author, Why the Right Went Wrong

"Juan Williams' We the People is a fascinating intellectual romp through American history.  All sorts of burning current event issues— the Gun Lobby, immigration, evangelical politics, sexual revolution— are brilliantly explored by Williams.  Only a first rate mind could have written such a wide ranging and original survey.  Highly recommended!"
--Douglas Brinkley, Professor of History at Rice University and author of Rightful Heritage:  Franklin D. Roosevelt and the Land of America

"The Founders themselves would have approved of this ambitious and endlessly fascinating book. With his customary acumen, Juan Williams weaves together a rich montage of the people shaping a diverse and dynamic modern America. We the People is social history at its very finest, and belongs on the bookshelf of all history buffs. What a daring book! What a triumph!"
-- Jay Winik, author of 1944 and April 1865

"Juan Williams has penned a rich, fascinating, and zesty tour among the men and women who have helped shape what we think of today when we think of America.  The book is provocative, fun, and nonpartisan, all at the same time.  Just what we need to explain how we got here, and where we might be headed."
-- Stephen L. Carter, William Nelson Cromwell Professor of Law at Yale University

"The battle over the Constitution and how the USA should be run rages on. For Americans who want an informed view of the great debate, there is no better book than We the People. I thank Juan Williams for writing it."
-- Bill O’Reilly, Anchor, Fox News Channel
or
Not Currently Available for Direct Purchase
Copyright © 2020 American Booksellers Association