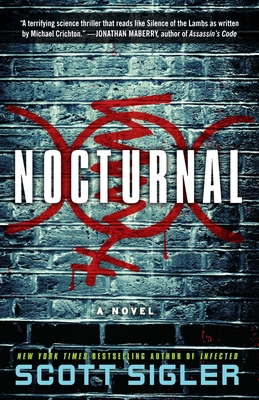 Scott Sigler reinvented the alien-invasion story in his bestselling novels Infected and Contagious… rebooted the biotech thriller in Ancestor…now, in his most ambitious, sweeping novel to date, he works his magic on the paranormal thriller, taking us inside a terrifying underworld of subterranean predators that only his twisted mind could invent.

As Bryan and his longtime partner, Lawrence “Pookie” Chang, investigate the murders, they learn that things are even stranger than they at first seem. For the victims are all enemies of a seemingly ordinary young boy—a boy who is gripped by the same dreams that haunt Bryan.  Meanwhile, a shadowy vigilante, seemingly armed with superhuman powers, is out there killing the killers.  And Bryan and Pookie’s superiors—from the mayor on down—seem strangely eager to keep the detectives from discovering the truth.

Doubting his own sanity and stripped of his badge, Bryan begins to suspect that he’s stumbled into the crosshairs of a shadow war that has gripped his city for more than a century—a war waged by a race of killers living in San Francisco’s unknown, underground ruins, emerging at night to feed on those who will not be missed.

And as Bryan learns the truth about his own intimate connections to the killings, he discovers that those who matter most to him are in mortal danger…and that he may be the only man gifted—or cursed—with the power to do battle with the nocturnals.

Featuring a dazzlingly plotted mystery and a terrifying descent into a nightmarish underworld—along with some of the most incredible action scenes ever put to paper, and an explosive, gut-wrenching conclusion you won’t soon forget—Nocturnal is the most spectacular outing to date from one of the genre’s brightest stars.

Praise For Nocturnal: A Novel…

"If you're a fan of police procedurals from Michael Connolly, Elmore Leonard or Joseph Wambaugh and you miss the bio-tech science fiction of the late, great Michael Crichton, you'll find "Nocturnal" a treat."--Huntington News

"Sigler is in full control of his talent for sharp characterization and amazing visualization." -- Charlaine Harris, #1 New York Times bestselling author of the Sookie Stackhouse series

"Red meat for readers who wish Harry Potter had swapped his YA credentials for a badge and gun." -- Kirkus Reviews

"Some of the most beautiful carnage we've seen in ages."--io9.com

"A terrifying science thriller that reads like Silence of the Lambs as written by Michael Crichton. Inventive and deeply disturbing." -- Jonathan Maberry, New York Times bestselling author of Assassin's Code

"Will make the end-of-year favorite lists for mysteries, thrillers, science fiction, horror, and yes, just plain old fiction, period. If you are a fan of genre fiction, you have to read Nocturnal."--BookReporter.com

"For fans of realistically presented horror fiction, this is a must-read.”--Booklist

"A hugely enjoyable read by an author who continues to grow."--British Fantasy Society

"One of the most original pieces of genre fiction I have read in a long time. Sigler is like Stephen King with a huge dose of testosterone and adrenaline."--Crimespree Magazine

SCOTT SIGLER is a popular podcaster and the New York Times bestselling author of Infected, Contagious, and Ancestor.  He lives in San Francisco with his wife and their dog.

www.scottsigler.com
Loading...
or
Not Currently Available for Direct Purchase