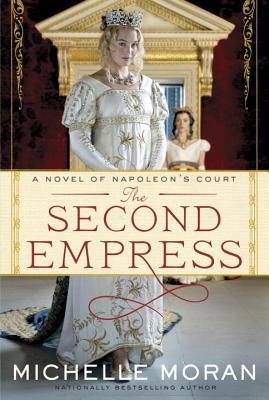 A Novel of Napoleon's Court

National bestselling author Michelle Moran returns to Paris, this time under the rule of Emperor Napoleon Bonaparte as he casts aside his beautiful wife to marry a Hapsburg princess he hopes will bear him a royal heir

After the bloody French Revolution, Emperor Napoleon’s power is absolute. When Marie-Louise, the eighteen year old daughter of the King of Austria, is told that the Emperor has demanded her hand in marriage, her father presents her with a terrible choice: marry the cruel, capricious Napoleon, leaving the man she loves and her home forever, or say no, and plunge her country into war.
Marie-Louise knows what she must do, and she travels to France, determined to be a good wife despite Napoleon’s reputation. But lavish parties greet her in Paris, and at the extravagant French court, she finds many rivals for her husband’s affection, including Napoleon’s first wife, Joséphine, and his sister Pauline, the only woman as ambitious as the emperor himself. Beloved by some and infamous to many, Pauline is fiercely loyal to her brother. She is also convinced that Napoleon is destined to become the modern Pharaoh of Egypt. Indeed, her greatest hope is to rule alongside him as his queen—a brother-sister marriage just as the ancient Egyptian royals practiced. Determined to see this dream come to pass, Pauline embarks on a campaign to undermine the new empress and convince Napoleon to divorce Marie-Louise.
As Pauline’s insightful Haitian servant, Paul, watches these two women clash, he is torn between his love for Pauline and his sympathy for Marie-Louise. But there are greater concerns than Pauline’s jealousy plaguing the court of France. While Napoleon becomes increasingly desperate for an heir, the empire’s peace looks increasingly unstable. When war once again sweeps the continent and bloodshed threatens Marie-Louise’s family in Austria, the second Empress is forced to make choices that will determine her place in history—and change the course of her life.
Based on primary resources from the time, The Second Empress takes readers back to Napoleon’s empire, where royals and servants alike live at the whim of one man, and two women vie to change their destinies.


Praise For The Second Empress: A Novel of Napoleon's Court…

"Moran has once again proven her skills as a mesmerizing storyteller with The Second Empress. She gathers her readers into the heart of the story and takes them on an adventure into a world where most would never dare venture. Moran's characters are engaging and her use of historical facts, bits and pieces of correspondence and ephemera tie this story together to create a fascinating tale that won't soon be forgotten.”  —Times Record News

“Stunning in form, theme, and plot. . . Don’t hesitate to purchase this beautifully written gem, which is certain to shoot to the top of the charts, if not start a craze for everything Moran.” —Library Journal

Red Hot Book of the Week, SheKnows.com: “Michelle Moran is beloved by readers of historical fiction for her lively and well-researched novels. . . Marie-Louise may be the character that readers will love, but it is Pauline they will love to hate. . . Moran describes the end of Napoleon's empire in vivid, realistic terms. She wastes no time attempting to make the reader sympathetic for the megalomaniac Napoleon, instead providing compelling -- if not always entirely likable -- characters who must make difficult choices: What is the best way to be loyal to one's family? When does self-respect and self-worth require giving up the person you love?” —SheKnows.com

“Compelling fiction. . . Ostensibly the portrait of Marie-Louise of Austria, who became Napoleon’s second wife, the novel’s title could as easily apply to the emperor’s sister, Pauline. . . Another enjoyable historical from Moran.” —Publishers Weekly

“This book covers the last six years of Napoleon’s reign… If you like French history you will enjoy this novel.” —British Weekly

MICHELLE MORAN's experiences at archaeological sites around the world motivated her to write historical fiction and continue to provide inspiration for her novels. She is the author of the national bestseller "Nefertiti," "The Heretic Queen," "Cleopatra's Daughter," and "Madame Tussaud." Visit her online at michellemoran.com.
Loading...
or
Not Currently Available for Direct Purchase